Limbs found in bag in north Dublin could be missing teenager 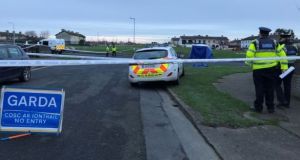 Gardaí at the scene in Coolock on Tuesday morning where a bag containing human limbs was found. Photograph: Dara Mac Dónaill

Gardaí believe the human limbs found in a bag in north Dublin on Monday night could be those of a missing teenager.

The bag, which was found in the Moatview area of Darndale at about 10pm on Monday, contained what are believed to be the limbs of a young male. Only the limbs were in the bag and there is concern the missing parts of the body may have been dumped elsewhere.

Garda sources said the investigation into what they called a “disturbing” case was still in its early stages. The investigation team is understood to be keeping an open mind on the possible identity of the victim and the background of the killing.

Searches are being conducted in the Darndale area for the other body parts.

Gardaí were now set to take a DNA sample from the limbs and cross check it against the family of the missing teenager.

The missing youth is not from Dublin but is believed to have been working with criminal elements from the Coolock area.

Gardaí believe he is linked to drug dealers operating in a county on the east of the country and that he may have been conducting criminal business between the gang he was working for and another gang in Dublin.

Sources stressed while this was a main line of inquiry, the remains may be those of another person.

A murder investigation cannot be established until a pathologist examines the body parts that have been recovered so far and formally determines the limbs are those of a murder victim.

Garda sources said all the resources of a murder inquiry had been committed to the case immediately the discovery was made on Monday night.

Minister for Justice Charlie Flanagan said he was shocked and horrified at the discovery of the dismembered human remains in north Dublin on Monday night.

The Minister described the killing as a depraved act of violence and he extended his sympathies to the family of the victim.

He also sought to reassure people living in the locality that their concerns and the issue of violent crime in their area is being taken seriously at the highest levels and urged people to co-operate with An Garda Síochána.

Gardaí­ sealed off the scene of the discovery following the find, believed to be made by young people in the area.

The scene was preserved pending a forensic and technical examination. The Garda Technical Bureau and the State’s Pathologist’s Office have been informed.

In a statement, gardaí said “what are understood to be human limbs were found in a bag outside houses at the junction of Moatview Gardens and Drive.”

An incident room has been established at Coolock Garda station and anyone with information is asked to contact the station at 01-6664200.

There has been serious concern about the security situation in Darndale and the wider Coolock area over the past 18 to 24 months, with a number of gangland killings and attacks on gardaí, including a Garda vehicle having been shot at.

A man was shot and killed in Darndale last year and four others have also been killed; with all of the victims either from Coolock, shot dead there or closely linked to a crime gang based in the north Dublin suburb.

In May, another member of that gang, Sean Little (22), from Kilmore, Dublin, was shot dead near Walshestown. Also in May, Hamid Sanambar (41), an Iranian gangland figure in Ireland, was killed on Kilbarron Avenue, Kilmore West.

Last November, Eoin Boylan (22) was shot dead in the front garden of his parents’ home on Clonshaugh Avenue.

His killing was drug-related and linked to the same feud that claimed the lives of the men killed in the months before him.