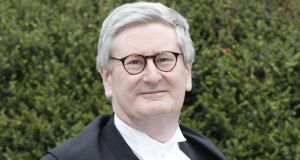 Saturday’s “silent march” will see Mr Justice MacMenamin carrying letters of support from Chief Justice Frank Clarke and the Association of Judges in Ireland (AJI). He will march in full robes along with colleagues from Romania, Bulgaria, Hungary, Greece, France, Denmark, Germany, the Netherlands, Norway, Sweden, Portugal, Belgium and the three Baltic countries.

The letters from the Chief Justice and the AJI are expected to express concern at the Polish government’s measures and support for their judicial colleagues.

“It’s important to have people say ‘enough is enough’ because a campaign against judges has been running for years with government politicians leading the attacks,” said Poznan district judge Monika Frackowiak, co-organiser of a march she says is “non-political, purely about legal issues and values”.

Ms Justice Frackowiak is one of two judges identified in an Amnesty International report as suffering years of intimidation and harassment in relation to her stance on judicial independence.

She said previously she was facing several “absurd” charges including accusations of delays in giving written judgments, taking sick leave and speaking to foreign journalists.

“It’s very supportive for us. We really appreciate this,” she said in response to Irish involvement in the march.

She said from the start the Irish judiciary had been very supportive of their Polish colleagues on the matter. “It gives us strength so from that point of view it’s very important.”

However, she is not confident the march will cause the government to reverse its measures.

“I don’t believe they are going to step back because I have seen what they have been doing for five years or so.”

A request for comment from the Polish government was not successful. The Polish embassy in Ireland declined to comment.

Protest has been building for years against the judicial reform programme of Poland’s ruling Law and Justice party (PiS). The ruling national conservatives insist the reforms are about freeing the judiciary of encrusted structures and cronyism. Critics see a deliberate campaign to bring the judiciary under political control.

In the most recent twist, the supreme court used a ruling from the European Court in Luxembourg to declare illegal two controversial bodies set up by the Polish government: one for judicial appointments, the other a disciplinary chamber for judges.

Both bodies are political entities packed with government loyalists, the supreme court said, meaning the judges appointed by the body and their rulings have no legal basis. The government has not reacted to the ruling, suggesting the final word in such matters rests with the constitutional court – which critics say is now under government control.

Leading judges involved in the battle against judicial reform say the presence of European judges, all marching in their robes, will give their campaign a lift.

“As far as I remember this is the first time in the history of free Poland after 1989 that we have organised such an event,” said lawyer Sylwia Gregorczyk-Abram.

She represented supreme court president Malgorzata Gersdorf in a recent defamation case against another judge who insinuated that Prof Gersdorf’s presence on the bench meant “criminals” were serving in the judiciary.

Prof Gersdorf, a vocal critic of the judicial reforms, was forcibly retired by the government but reported for work until the CJEU in Luxembourg ordered her and dozens of others of judges be reinstated.

Mr Justice Stanislaw Piotrowicz, who suggested there were “criminals” in the Polish courts and lost his defamation case in the first instance, has been promoted to the constitutional tribunal.