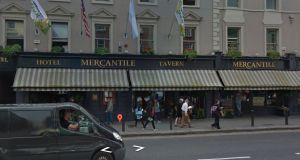 Well-known Dublin publican Frank Gleeson has claimed his fellow shareholders in the Mercantile Group summarily sacked his son Rory as part of a “scorched earth” policy that is part of a campaign against him. File photograph: Google Street View

The payment of an annual salary of €25,000 to a woman who appeared not to have any responsibilities is among the claims cited in a bitter court dispute between the owners of one of Dublin’s largest bar and restaurant groups.

Well-known Dublin publican Frank Gleeson has claimed his fellow shareholders in the Mercantile Group summarily sacked his son Rory as part of a “scorched earth” policy that is part of a campaign against him.

However, the other shareholders say Rory Gleeson, who had an annual salary of €35,000, was let go after they learned he was apparently working for the Mantra nightclub in Maynooth, Co Kildare, while being a full-time employee of Mercantile.

They also say they suspect that Frank Gleeson was involved in operating the nightclub, even though he has an exclusivity agreement with the group.

The Mercantile owns such well-known pubs as Café en Seine, the George, Whelans and the South William, and restaurants including the Green Hen, Pichet and Mercel’s, as well as the Mercantile Hotel.

Mr Gleeson owns 15 per cent of the group, with the other shareholders including Setanta Sports TV founders Leonard Ryan and Michael O’Rourke, accountant Mark O’Meara, and US-based Irish businessmen Maurice O’Regan and Michael and John Breslin.

In a case where Mr Gleeson is claiming he is being oppressed by other shareholders in the group, Mr O’Meara has told the Commercial Court in an affidavit that Rory Gleeson first appeared on the payroll without the approval of the group board.

“Rory Gleeson’s appearance on the payroll is similar to the appearance of Ms Elizabeth Wichur on the payroll of the Mercantile on an annual salary of €25,000. Mr [Frank] Gleeson has a close personal and business relationship with Ms Wichur, which was never disclosed to the board, and we believe the payment to her is not supported by any responsibilities carried out for the Mercantile Group.”

Mr Gleeson, for his part, referred to the “malicious, unprofessional and plainly unlawful manner in which my son’s employment was terminated”.