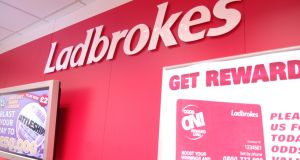 Operating profit jumped sharply at merged Ladbrokes Coral despite despite group paying out heavily on a number of gambler-friendly sports results towards the end of 2016. Photograph: Ladbrokes/PA Wire

British bookmaker Ladbrokes Coral Group said on Tuesday 2016 operating profit rose about 22 per cent despite paying out heavily on a number of gambler-friendly sports results towards the end of the year.

The company, created when Ladbrokes joined forces with Coral in a merger last year, said operating profit rose to £264.3 million, helped by growth in its digital and European retail businesses.

Revenue at its European retail business, which comprises brands such as Eurobet Italy, Ladbrokes Belgium, Ireland and Spanish joint-venture Sportium, were 24 per cent ahead of last year.

The company said cost savings from the merger will be greater than originally expected as it revealed that Italian soccer results have weighed on business in the early months of 2017.

Cost synergies from putting the Ladbrokes and Coral bookmaking chains under the same ownership will reach £100 million (€115 million) per year by 2019, the company said Tuesday, up from a previous goal of £65 million. “The challenges around integrating two significantly sized companies has been managed well,” chief executive Jim Mullen said.

Shares in the merged group dropped despite the strong figures amid speculation of a UK government crackdown on the profitable betting terminals. – Reuters / Bloomberg

1 Admission of mistake in Oxford vaccine dose raises doubts over reliability
2 Cliff Taylor: Deal or no deal we are now heading for a hard Brexit
3 Move to EU or face disruption, City of London is warned
4 Last orders for Rí-Rá and Globe as Central Hotel gets green light to expand
5 Irish Life fund pays €49m for 94 Dalkey apartments
6 Fiona Reddan: Who’s afraid of Revolut? Not AIB and BOI it seems
7 Karlin Lillington: How I managed to cut my mobile phone bill by at least half
8 Workers have little idea of the cost of retirement income
9 German watchdog reports EY to prosecutors over Wirecard audit
10 Lahinch Golf Club runs out of its own cash after €3m Covid-19 hit
Real news has value SUBSCRIBE