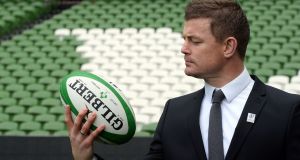 Brian O’Driscoll: as senior advisor with Teneo he will help launch the new Teneo PSG brand at an event in the National Gallery on Merrion Square in April. Photograph: Eric Luke/The Irish Times

New York-based executive advisory group Teneo Holdings plans to combine its two Irish businesses under the one brand next month.

This move follows its acquisition last year of PSG Communications in Dublin, a corporate and consumer public relations agency headed by Michael O’Keeffe.

The combined business will be called Teneo PSG and employ more than 60 staff.

Teneo, which was co-founded in 2011 by Irishman Declan Kelly, plans to open a new office in the city centre of Dublin where some of PSG’s staff will relocate and work alongside Teneo’s own team in Ireland.

The group will also retain PSG’s existing base at Montrose near Donnybrook.

Teneo intends to launch the new brand in April at an event in the National Gallery on Merrion Square, which will be hosted by Mr Kelly.

US senator George Mitchell, who facilitated the Northern Ireland peace talks, will address the event along with former Irish rugby star Brian O’Driscoll, who is a senior adviser with Teneo, and golfer and Teneo partner Graeme McDowell.

Teneo operates 12 divisions globally and the new office in Dublin will be its 15th.

Mr O’Keeffe will be chief executive of Teneo PSG with Brendan Murphy, who headed up Teneo’s Dublin operation prior to the acquisition, taking on the role of vice chairman.

The various divisions of PSG will be matched with the relevant units within Teneo.