UDG expands capacity in US and UK for healthcare services firm 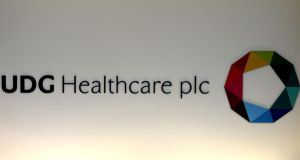 The two acquisitions announced by UDG Healthcare will not have a material impact on profitability this year, Goodbody Stockbrokers said. Photograph: David Sleator

UDG Healthcare has expanded the capacity of its contract packaging and clinical services provider unit with two acquisitions in the United States and the UK.

As part of the transaction, DSI will also become a commercial and clinical client, with Sharp providing packaging services for a number of their US-branded products and clinical trial activity. The acquisition is expected to have an “immaterial impact on FY17 profitability” UDG said.

In the UK, Sharp has announced a £9 million (€10.6 million) investment in a new facility in Rhymney, south Wales, for its clinical packaging business. The initial phase of the expansion, which is expected to be completed by late 2018, will involve the acquisition and renovation of a 10,200sq m (110,000sq ft) facility within the site, more than triple the size of the current UK facility. Initially 7,000sq m (75,000sq ft) will be fitted out. The site also benefits from the potential for further significant capacity expansion.

Mike O’Hara, managing director of Sharp Packaging Services, said the company continued “to add further capacity and scalability to both our commercial and clinical packaging businesses in response to growing demand for our packaging services”.

UDG also reaffirmed on Monday that Myles Lee, chief executive of construction giant CRH between 2009 and 2014, joined the board of the company as a non-executive director on April 1st. Mr Lee will also be appointed a member of the audit committee and will become chair of the committee in May, replacing Philip Toomey, who will be stepping down from the committee.

In a note to clients, Goodbody Stockbrokers said both announcements were in line with UDG’s strategy of further expansion but would not have a material impact on profitability this year.