Vodafone India to merge with Idea Cellular in $23bn deal 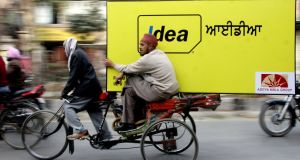 Vodafone’s Indian unit agreed to merge with Idea Cellular Ltd to create a wireless company that’s more than twice as big as ATandT by subscribers – and a new leader in a market that became very competitive after India’s richest man offered free phone calls.

Vodafone will own 45.1 per cent of the combined company, after selling a 4.9 per cent stake in the new entity to billionaire Kumar Mangalam Birla’s holding companies, according to a stock exchange filing Monday.

Birla’s companies will take a 26 per cent holding, with the remainder being held by the public. The new company is worth $23.2 billion (€21.5bn), based on the combined enterprise value of $12.4 billion for Vodafone India and $10.8 billion for Idea Cellular. Shares of Idea Cellular jumped as much as 14 per cent in Mumbai.

The enlarged wireless operator would have 395 million subscribers, exceeding those of market leader Bharti Airtel Ltd.

Vodafone would gain a listing in the world’s second-largest wireless market, which it has been considering since at least 2011.

Vodafone and Idea will each control three seats on the board of the new company, which will also have six independent directors. Birla will have the right to appoint a chairman.