Kylemore serves up tasty dividend after profits as turnover rises 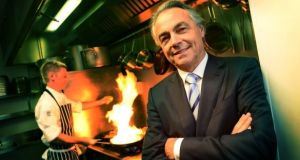 Brian Hogan: The KSG chief executive said the catering company’s turnover rose to €58.8m in the year to the end of March 2016. Photograph: Bryan O’Brien

Shareholders of the group, which include Irish-based fuel distribution-to-technology sales conglomerate DCC, enjoyed a €1 million dividend after KSG reported pretax profits of €1.26 million for the 12 months to the end of March 2016. This compares with a profit before tax of €924,000 a year earlier.

Turnover at the group, whose retail brands include Cafe Kylemore, Quiznos, Coffee Cuisine and Pure Juice Bars, rose 8 per cent to €58.8 million from €54.1 million. For the prior year, revenues jumped 10 per cent from €49.3 million.

KSG was founded in 1920 by the Hogan family as a dairy in Birr, Co Offaly. The family offered DCC €6.54 million for its 50 per cent stake in the group in late 2015, but the offer was rejected.

“A number of new contracts commenced activity during the year and KSG will continue to invest in the business and new growth opportunities,” directors Brian Hogan and Tommy Breen (who is also chief executive of DCC) said in a note included with the accounts. “KSG believes its focus and track record will support further expansion and growth.”