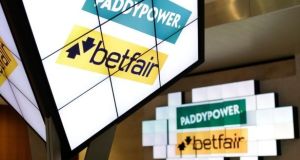 Mr Corcoran, previously a Paddy Power executive who later became Betfair chief executive ahead of the two companies joining forces. is to see his salary rise by 2 per cent this year to €714,000, from €700,000, the accounts show. This includes a payment for his role as a director of the group.

Former Paddy Power boss Andy McCue, who headed the company prior to Betfair merger, and who became chief operating officer of the enlarged group, was paid a total of €2.15 million in salary, benefits and shares last year.

The remuneration for Mr McCue, who left the company last April, did not include a bonus payment. However, he did receive a loss of office payment.

In accordance with his contractual entitlements , Mr McCue received €3.5 million (equal to 2.5 times total remuneration) when he stepped down from the group and the former CEO was treated as a “good leaver” under the company’s share plans.

“ With regards to Andy’s payments for loss of office, these were in line with typical practice and our legal obligations in Ireland. The committee and the board believe that the approach taken was appropriate in the circumstances of two complex businesses coming together and firmly in the long-term interests of shareholders,” the company said.

Mr McCue’s outstanding long-term incentive plan (LTIP) awards have been reduced on a pro-rate basis. Almost 20,000 shares from his 2013 LTIP award vested last May with a further 13,599 shares from a 2014 award vesting in early March.

Cormac McCarthy, who ceased to be employed by the group in February 2016, received a redundancy payment of €157,160 and a pro-rata annual bonus totalling €104,000. His total remuneration package for 2016 totalled £2.1 million.