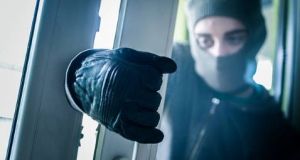 A man aged 85 was confronted at a house in the Maple Road area of Coshquin, Derry, by a man and woman wearing balaclavas on Friday evening. File photograph: iStockPhoto

An 85-year-old man was threatened with a screwdriver during a burglary in Derry.

The victim was confronted at a house in the Maple Road area of Coshquin by a man and woman wearing balaclavas on Friday evening.

The intruders forced the victim into the bathroom, where the woman held him as the man searched the house.

The pair made off with a sum of cash and the resident’s mobile phone after pulling out the landline telephone cable.

PSNI Det Const Richard Donnell said: “The victim, who was unable to raise the alarm until the following morning, Saturday 13 May, was left very shaken but was physically uninjured.”