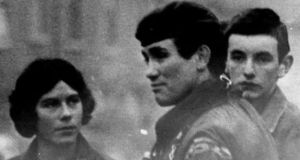 The Independent Commission for the Location of Victims’ Remains is keen to hear from anyone who can help them to locate the body of British Army Grenadier Guard Capt Robert Nairac (centre), who was abducted, murdered and secretly buried by the IRA 40 years ago. File photograph: PA

The commission responsible for finding “The Disappeared” are appealing for information that could lead them to the remains of British army captain Robert Nairac.

The Independent Commission for the Location of Victims’ Remains (ICLVR) is keen to hear from anyone who can help them locate the body of the Grenadier Guard who was abducted, murdered and secretly buried by the IRA 40 years ago.

Capt Nairac was working undercover when he was abducted from the Three Steps Bar in Drumintee in south Armagh on May 14th, 1977.

He was then taken to Ravensdale Forest near Dundalk where he was beaten and shot dead.

“I think it’s likely that Robert Nairac’s remains are buried somewhere close to where he was murdered near the bridge over the Flurry River in Ravensdale,” Mr Knupfer said.

“As our recent success in finding the remains of Séamus Ruddy in France shows, when we have the right information we will find and recover the remains and return them to the family for a Christian burial. That is all that we and the families are interested in.”

The remains of Mr Ruddy - a teacher from Newry and former member of the Irish National Liberation Army’s political wing, the Irish Republican Socialist Party, who was murdered in 1985 - were located near Rouen in France last week after new information came to light.

Of the 17 Disappeared, there are now three remaining bodies to be discovered: those of IRA victims Columba McVeigh, from Donaghmore in Co Tyrone, who went missing in 1975; Joe Lynskey, who went missing from Belfast in 1972; and Capt Nairac, who was shot dead close to the Border in the Louth/south Armagh area in 1977.