Man in court over gun and ammunition seizure in Dublin

More than 15 firearms with 1,300 rounds of ammunition and cash were found in a search by gardaí 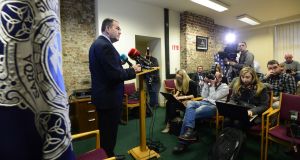 Detective Superintendent Tony Howard at the Drugs and Organised Crime Bureau at Dublin Castle during his press briefing on a significant seizure of firearms and ammunition near Baldonnel, Co Dublin in January. Photograph: Cyril Byrne/The Irish Times

A 28-year-old man will appear before Blanchardstown District Court on Friday morning charged in connection with a with a seizure of large cache of guns and ammunition earlier this year.

A total of 15 firearms along with 1300 rounds of ammunition, and a substantial amount of cash were recovered during a search operation led by gardaí at Greenogue Industrial Estate, Baldonnel, Co Dublin on January 24th.

The man was arrested in the Gorey area of Co Wexford on May 7th and detained under Section 50 of the Criminal Justice Act, 2007

He is the fourth person to be charged in the case. Three other men are currently before the courts charged in connection with the investigation.