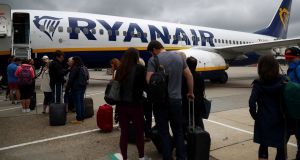 Ryanair staff appear to be the hardest to find in European airports if passengers are hit by flight disruptions, while Aer Lingus staff are considerably easier to come by when things go wrong, a survey has found.

When actually dealing with complaints, however, the airline with the lowest scores is British Airways, according to a survey from the UK-based consumer group, Which?

The consumer advocacy group collected details of more than 2,500 experiences from passengers who suffered delays and cancellations with airlines across Europe to see how they rated the immediate response and handling of subsequent complaints or claims.

The survey covered most of the major airlines serving Europe’s airports and although much of the Which? audience is based in the UK, it does include both Irish airlines.

It found that Ryanair customers were the least likely to be able to find a member of staff to assist them, with 61 per cent of its passengers polled saying they found themselves in this position.

By contrast 38 per cent of Aer Lingus passengers said that staff members were hard to find when things went wrong.

In 44 per cent of all cases, passengers said there were no staff members available to help and even when airline employees could be found they were unhelpful in 20 per cent of situations.

Only one in four respondents told Which? they were generally satisfied by the way their grievance had been handled when they complained about a delay, while 61 per cent were left disappointed.

The lowest level of satisfaction was recorded by BA passengers. Only one in seven passengers surveyed were satisfied with the outcome of their complaint, while three-quarters were left dissatisfied. This was considerably higher than the number of disappointed travellers with Ryanair which was put at 63 per cent.

The surveyed travellers most likely to be given assistance by staff in the event of a delay or cancellation were those who flew with Emirates, Jet2 and Virgin Atlantic.

Which? found that when airline staff were on hand to assist with inquiries, they were generally helpful. Passengers said staff were helpful in 80 per cent of cases overall. “Our research shows that it’s not just the usual suspects who are letting their customers down, even British Airways is falling well short,” Which? Travel’s Naomi Leach said.