From the archive : ‘ Point to point, in comfort, for less’, read one 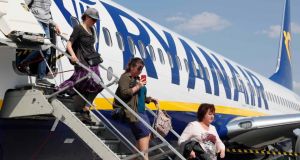 By February 1986, it was clear that Ryanair was going to continue to grow. Photograph: Gleb Garanich/Reuters

May 4th, 1985
As millions of people sit in the yellow and blue plastic cabins of Ryanair planes this summer, it can be easy to forget the humble beginnings of an airline that has changed the landscape of travel for so many people.

Back in 1985, on May 4th, the origins of Ryanair were detailed in The Irish Times under the headline, "Flight to Knock stays in the air". “A new airline was launched yesterday with a flight from Dublin to the Connacht Regional Airport at Knock, Co Mayo,” the article began, “but much to the disappointment of the people on the ground, the 15-seater aircraft didn’t make a landing.”

The plane in question was a twin-engined Brazilian-designed Bandeirante which “flew low along the runway a couple of times without touching ground and then headed back for Dublin”. A spokeswoman for Ryanair said at the time that the airport at Knock wasn’t officially licensed and therefore there was no way the plane could land.

Thankfully, Monsignor James Horan, the parish priest of Knock, was anticipating getting a licence in due course. He hoped that the first flights would be taking off from Knock that October, heading for Rome, of course.

“The new airline intends to operate mainly to Britain and the principal European centres,” Deaglán de Bréadún wrote. The then chairman of Ryanair, Dr Ken Holden was also on the flight, and said that because a number of private airlines had closed down recently, a new alternative service was needed. Ryanair had at that time hired “six pilots, three hostesses and eight ground crew.”

The article ended with the news that the company was negotiating the purchase of a second aircraft. The airline’s establishment had been announced in the newspaper just two days previously, in a short news brief underneath a story about Aer Lingus.

The following weekend, a small advertisement appeared in the newspaper in the personal ads section. “Point to point, in comfort, for less,” the ad read, “Ryanair can fly you, and 14 others, from just about anywhere in Ireland to just about anywhere in the UK or Europe. You’ll fly in considerable luxury at whatever time suits you. To a point that would frequently be far closer to your actual destination than any scheduled flight could land you.

“A race meeting. An exhibition. A business appointment. A day out with a difference. Whatever. Tell us how many you’ll be, and where you wish to fly. We’ll quote. And we guarantee you’ll be pleasantly surprised.” The almost genteel ad is a far cry from the brash advertising campaigns Ryanair would come to be known for.

A month later in June 1985, the airline had upped its advertising game, with the characteristic tongue-in-cheek sentiment already emerging in those early days. How To Enjoy A Thoroughly Unfair Business Advantage, the ad declared, “Fly Ryanair instead, and get there first.”

Initially, these newspaper advertisements focussed on chartering flights for business purposes, and to sporting events; Hickstead for the horse show, the TT races, and the Epsom Derby. Then, in October 1985, Knock airport finally got sorted. The story was featured on the front page of the Irish Times on Friday October 1985: “First three flights will take off from Knock today”.

Those were Aer Lingus flights, but the article noted that Ryanair was “seeking permission to begin daily flights between Knock and Gatwick airport in London using 44-seater turbo-prop aircraft.”

By February 1986, it was clear that Ryanair was going to continue to grow, “Ryanair has purchased two second-hand British Aerospace 748 aircraft for £3 million,” a story by Dermot Hayes read, “The two turbo prop aircraft will be used on the scheduled Dublin to Luton route planned to begin operation in May.”

Ryanair had received permission to operate the route by the Department of Communications the previous December.

It wouldn’t be long before competition over fares became the real story. In April 1986, Jack Fagan wrote a piece about three airlines cutting fares between Ireland and Britain.

But Ryanair wasn’t the airline cutting fares, other airlines were doing so in an attempt to ensure Ryanair didn’t gain a strong foothold on the Dublin-London route.

Aer Lingus, British Airways and Dan Air announced the cuts, undercutting Ryanair by £3 by reducing their London fares from £98 to £95, although conditions were attached, “The £95 super APEX fare,” Fagan wrote, “will have to be purchased one month in advance and the traveller will have to spend one Saturday abroad.”