Bringing the love and magic to Galway’s Merlin Woods 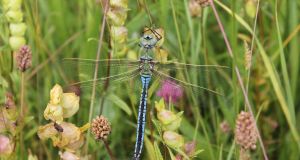 An emperor dragonfly, the first record of the species within Galway City, resting in the wildflower meadows in Merlin Woods. Photograph: Colin Stanley

“Our report on Merlin Woods was a dusty, academic, boring old plan. The Friends of Merlin Woods have brought it to life. They brought the love to the park.”

Janice Fuller does not do herself justice here. She is an ecologist who is exceptionally skilled at engaging local communities with biodiversity plans, as we saw on these pages some years ago. And Caroline Stanley, one of the founders of the “friends” group, describes Fuller’s 2009 Habitat Survey and Management Plan as their “bible”’ for assessing and protecting the cornucopia of insects, plants, birds and mammals on this large but long-neglected mosaic of woods, limestone pavement and wildflower meadows in the eastern part of Galway City.

She was, however, completely unaware of Fuller’s report when she, her husband Colin and a few others started their group in 2012, with no bigger ambitions than to clear some of the then abundant litter in the park. The only current description of the park they could find on the internet was of a “dirty, murky wood”. Thanks to their four annual pick-ups it’s a lot cleaner today.

“We started as a community group, and we’re still a community group,” Stanley told me when we met, with a dozen other friends, on the colourful improvised benches in a garden on the edge of the park, one of several initiatives that have sprung up in their orbit.

“We don’t call ourselves an environmental group,” she says. “That has negative connotations for some people.”

“Their events are very creative,” echoes Fuller, on the phone a few days later. “They get people into the park who wouldn’t be seen dead on a ‘nature walk with experts’. They’ve engaged everyone from the local hippies to the local parents. They understand that the broad amenity use of the woods is key to its survival.”

Yet Fuller also praises the nature expertise that members of the group have developed, especially on insects and plants. This is very evident in the excellent photographs, especially by Colin Stanley and Noel Barbour, on their Facebook page and their captions, often identifying species that would be unknown to many of us.

It’s certainly clear from the diverse interests expressed at our gathering that there are lots of motives for taking a walk in the woods, and that the group has achieved a model for engagement that many professional environmentalists could only dream about.

All of them are united by their sense that the place is important to them personally, and to the people around them. They have defended it successfully against moves to “develop” the site.

They are convinced that it is vital to the healthy future of this part of Galway – it is not the most privileged part of the city – that Merlin Park Woods should continue to be managed – and managed better – for nature and for recreation. They speak warmly of the support they have received from the city’s parks department, but more resources are clearly needed.

Sean McDermott, of the local Castlegar Athletics Club, says that the kids he is training can get bored with running, and sometimes don’t even want to finish a single lap on a sports pitch. “But if I take them out here they don’t want to stop. They just keep going further and further.”

And while he has no particular interest in wildlife himself, he loves running in the wildflower meadows, and mentions that he took pleasure in seeing a magpie and a rabbit “dance around each other” on his early morning run that day.

“It’s amazing. We are in the middle of the city and you can’t hear the traffic.”

Others present speak of how the park brings back childhood memories of their parents, and of the sense of spiritual healing they find there.

There is a constant flow of locals through the park during the morning.

As we are talking, Kai (5), the son of “friends” chairman Brian Fitzsimons, is trying to catch one of the numerous butterflies enjoying a patch of nearby nettles. He has skilled help from Colin Stanley, who has the proper equipment. They finally net (and later release, of course) a painted lady. Kai is clearly fascinated not only to see it up close in a specimen jar but to learn that it may have migrated from Africa, and can travel at more than 30kph.

Children are involved in many of the group’s activities, including plays and music celebrating events like Culture Night and Heritage Week, often playing the roles of animals threatened by human activities. It must help that the Stanleys are professional musicians, with a wide range of contacts in the arts world.

Now it’s time to get moving and see the places we have been talking about. The Stanleys lead the way through a 1960s Sitka spruce plantation that has been thinned enough for some natural regeneration of native trees, especially ash.

We move on in to broadleaf woods that may date back nearly 200 years, finding an enormous coppiced beech that is a favourite spot for one of the wood’s iconic species, the red squirrel.

Then we are out on to a patch of bare limestone pavement, recognised as a particularly important habitat by EU regulation. Invasive old man’s beard has been cleared here, allowing characteristic native lime-loving plants, like wall lettuce and even a sole, tiny, rue-leafed saxifrage, to survive.

The Stanleys also point out the park’s many cultural and historical features: a castle with a most unusual Sheelagh-na-Gig engraved on a high window, two mysterious graves from the 1650s, and some fine stone walls lovingly restored in yet another of the group’s projects. At several points we see the colourful highly informative signage the “friends” have created.

We continue across the sprawling buildings and tightly mowed lawns of Merlin Park Hospital in the middle of the site, into more woodlands that hold bird’s nest orchids, already gone to seed.

And beyond them again we find an extensive open landscape of meadows. They are a revelation, surely as rich a carpet of wildflowers, including multitudes of orchids (four species on the day), as you could find anywhere in the country. It has been recognised as such, and survived only because of the love of the Friends of Merlin Wood for their local places.

In 2013, the Friends of Merlin Wood learned that Galway City Council intended to run a busy bus corridor through the park, which is close to the old Dublin road and a motorway. An energetic campaign persuaded councillors to change their minds on this issue, but then a new threat arose: the Health Services Executive, which owns the southern area, decided to sell the meadows to a private group to build a badly needed hospice for the city.

“No one could ever be against a hospice,” says Colin Stanley, “but we were against locating it in these meadows. It would have destroyed them when other locations are easily available, including open spaces within the hospital area.”

It was a painful campaign for all concerned, but last January Bord Pleanála ruled against the development, pointing out that it contravened the city’s own development plan, though a large majority of councillors had supported it.

The “friends” do not imagine this will be the last time they will have to fight such misconceived “development” projects.