Bad tourists: What are the worst things Irish people do on holiday? 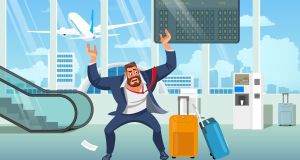 Have you ever broken the local rules when overseas and got into trouble for it? Our readers have been sharing their stories. Photograph: iStock

Earlier this month two Berlin backpackers fell foul of the burghers of Venice when they were caught making coffee using some class of stove in the shadow of the Rialto Bridge.

Under a law passed only recently, the authorities were able to fine the German coffee lovers €950 and expel them from the city for their transgression.

“Venice must be treated with respect and impolite people who come here and think they can do what they want must understand that, thanks to the local police, they can be stopped, fined and sent away,” the city’s mayor Luigi Brugnaro was quoted as saying.

Then there was the Austrian man in Trieste, who left the city €300 lighter and less refreshed than he may have wished, after a passerby spotted him sleeping in a hammock and called the police.

It emerged that he had broken a law which forbids people from attaching objects to trees. “The law is not for decorum but for the protection of public green spaces,” a police spokeswoman said. “The man hung his hammock over the promenade, which is exclusive for pedestrians.”

In the grand scheme of things, such crimes are pretty low level, but it got us thinking. What kinds of misdeeds have our readers been guilty of while on their holliers?

So we took too Twitter and asked a question: “Have you ever broken the local rules when overseas and got into trouble for it!? Pitching a tent in the shadow of the Eiffel Tower? Having a BBQ in Trafalgar Sq? Taking a picture in the Sistine Chapel or not shushing there?”

The responses were not slow in coming.

First out of the blocks was Damian Mulley, who admitted to “ordering a cappuccino after 12pm in Paris”. It’s a wonder he got out of the city alive.

And staying in Paris, Niki Collier recalled the time she “climbed on the side of Eiffel Tower and took a photo (before smartphones and selfies). Security swiftly appeared and asked me to get down. So I did. Next time I visited there were tall and wide fences at foundations - couldn’t do it any more.”

Kate McKenna was innocently queuing to enter a church in Venice when “an elderly woman slapped me on the shoulders. I was wearing a vest top and she wanted me to cover my shoulders.”

Moira Boo went into the Basilica in Florence in a sleeveless top and was “swiftly told I was ‘indecento’ or words to that effect and draped in a green tent-like garment to continue my walk-about, all the while feeling the steely glare of the security guard.”

Elizabeth Kehoe was “told off for having sleeveless dress when I was in Monaco and wanted to visit the church there”, while Sue Kirk was “hissed at in a church in Rome for the same thing”.

We are still waiting for a man to share a similar experience with us.

A woman who identified herself as HowdyasayNiamh was in Budapest and struggling to understand the metro system. “Went through a barrier,” she said. “Police got involved. I was fined. I was furious because it was completely unintentional. Only time I’ve ever been fined.”

Barry Toft was in Dallas and found himself in the line of fire when he was in Dealy Plaza and got “told off for taking a photo out the window of the Book Depository”. He said they were “seriously unimpressed when I asked had they patented the view”.

Dave Kenny said he was arrested in LA “for asking two door men if there was any craic in the night club. Like I rocked up there says to the lads on the door how’s she cutting lads any craic? Spent a couple of hours in a holding area of Rampart police station and had a great time.”

Jennifer Doherty took a shell from the beach at the Great Barrier Reef in Australia back to her hotel room. She went out for dinner and when she got back to the room found a letter telling her it was against the law.

Colum O’Connor was “almost arrested for walking on the grass in Nairobi Kenya”. He said he was let go “after an hour with a warning”.

James Spratt rested a tripod and camera on an old table in Vatican. “The guards went spare.”

John Larkin took a photo of the Croat/Bosnian border when passing through on a bus. He was taken off “by an armed guard to a room where he put his gun on the desk in front of me, wrote €100 on a piece of paper as a ‘fine’ and let me go when I didn’t have it!”

Paul Kane is still unsure if he broke the rules, but he did nearly get stuck in one of the “play” tanks in the kiddies section of the Musee des Blindes in France. “At least I probably gave a security guard a good CCTV laugh at the antics of a large Irishman trying to extract himself from a small tank.”

And finally there was Mary McGrath, who “didn’t tip a busker in Rome and he put the Curse of the Pope on me”.

Not this Pope, to be clear.