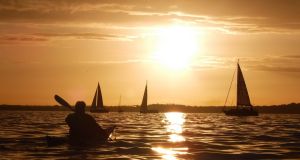 The setting sun while kayaking off Howth harbour.

As a recent convert to sea swimming off Ireland’s east coast, I jump at the chance to explore a little further out into Dublin Bay when I’m invited to go sea kayaking off Howth harbour. As I had kayaked only once before – well, twice if you include a trip on a Canadian canoe in Killarney Lakes about 30 years ago, I opt to go out in a two-person boat with a more experienced kayaker.

After a few minutes familiarising ourselves with the kayaks and paddle movements on dry land, we set off into Howth harbour for a few preliminary manoeuvres. Eileen Murphy, co-owner of Shearwater Sea Kayaking and a former competitive kayaker, wants to see how well this group of four beginners would manage to circle around the buoys before she brought us out into the open water. She shows us how to wiggle side to side in our boats, scoop up the water to move fluidly, and tap the flat-sided paddles strongly on the water to steady ourselves if the waves get choppy.

No bother to this novice bunch, blessed with the calmest sea you could imagine on a warm summer’s evening. We are soon paddling our way out towards Ireland’s Eye, the island just off the coast of north Dublin.

Moving around to the east side of the island, we are followed by a group of grey seals, popping their heads up beside our boats and doing body flips just for our – or their – amusement.

Paddling on through a narrow water channel, with densely packed seaweed on either side, we face rocky cliffs and sea stacks packed with seabirds, as if waiting for a performance to start. But they are the performers, as they screech and swoop from the cliffs above our kayaks, energised by life in the height of their nesting season.

Sean Pierce, bird expert and the other co-owner of Shearwater Kayaking, draws our attention to the quiet nesting kittiwakes, the noisy crowds of gullimots, the bottle green shags, the razorbills and gulls, the elegant black cormorants and the graceful gannets.

But, it’s the orange-beaked black and white puffins that we’re most excited to see. Boring their nests into the soil, they are harder to spot but all the more fun to identify. Two of them fly out in front of our boats just to prove they are there.

“We’re so lucky to have this biodiversity so close to a city. In other places, people have to travel longer distances to see such a variety of birds,” says Pierce. Minutes later, we are kayaking into a sea cave with the setting sun streaming in like a special effect in a movie.

We round the top of the island, passing the Martello Tower, and head back for the harbour, glowing with satisfaction. It’s a round trip of about 6km.

The sea remains calm throughout, the sky is blue and there is hardly a whiff of a breeze. This is simply not what I expected just off the coast of north Dublin. “Every time we go out, it’s different and an evening like this happens about 5 per cent of the time,” Murphy says.

She and Pierce have been running beginner and improver evening and weekend sessions of sea kayaking from Howth harbour for 12 years. They choose the north Dublin location for its sheltered harbour – which allows beginner groups to go out in most weather from March to October – even if it’s just around the harbour itself when the sea is choppy and the winds are high. Experienced kayakers continue year round.

Once you’ve earned your stripes, you can join Shearwater Sea Kayaking on trips to the west coast of Ireland, the Hebrides Islands off Scotland, or on its annual trip to Crete. Both Murphy and Pierce have circumnavigated Ireland by sea kayak independently, have level 5 personal sea proficiency and are qualified level 4 coaches. Murphy is also a qualified guide with the International Sea Kayak Guide Association.

She says most people who kayak with them are living in Ireland although occasionally a “discerning” tourist looking for true sea kayaking will join them. There is a significant wildlife focus built into all their trips, as well as history, geography and geology.

Mary Aust joins the beginners group once a week in the summer months. “I’m a fair weather kayaker. I love the feeling of having no responsibilities when I’m out in the kayak, the sense of exploring and every time you go, it’s different.”

Matthew Horrigan was out for his first time. “I didn’t find it hard at all. Two or three hours of an evening class is perfect. It was very calming and I enjoyed the nature,” he says.

The evening will stand out as one of the most enjoyable things I’ve had done this summer. Kayaking is sociable yet solitary, relaxing yet exhilarating but, above all, it gives you a sense of timelessness that is worth cherishing in what is often a frazzled and frazzling world.

Sylvia Thompson was a guest of Shearwater Sea Kayaking on its Try Sea Kayaking evening class from Howth harbour. shearwaterseakayaking.ie