Greece and Spain, but not UK, likely to be on list of countries ‘safe’ for Irish travellers 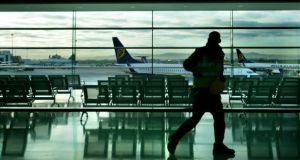 How to manage travel to and from Britain remains problematic but the Government is understood to have decided against allowing free moment. Photograph: Kate Geraghty

The likelihood of travel to and from Ireland resuming within days has receded further with Government sources confirming there is “not a chance” restrictions and quarantine rules will be lifted before the middle of next month.

Even when the lifting of restrictions begins, the number of countries Irish people will be allowed to fly to is likely to be extremely limited.

The Government is set to move to open “air bridges” between Ireland and other countries which have brought coronavirus under control. This would allow for the two-week quarantine period to be lifted for those arriving into Ireland from such areas – allowing Irish tourists to go on foreign holidays to certain destinations.

“The mood music has definitely changed and air bridges are being looked at in a very meaningful way but there is still no chance restrictions will be lifted on July 1st,” a source familiar with Cabinet thinking said.

“We realise we are behind the European Union but it still won’t happen quickly,” the source continued, referencing Tuesday’s call by the Taskforce on Aviation Recovery for restrictions to be lifted by the middle of next week.

Officials from the Departments of Transport, Health and Foreign Affairs are drawing up a list of countries to get the travel green light in the first instance with Malta, Greece, Portugal, Spain and Croatia likely to be among those included.

When it comes to containment of Covid-19, Finland and the Baltic states are among the best performing countries in the EU but they are not high on the list of destinations popular with Irish tourists.

A Cabinet sub-committee discussed the matter on Wednesday with plans for restarting cross-border travel to and from Ireland also high on the agenda for the Cabinet meeting on Thursday.

Among the decisions to be taken are the metrics to be used to determine which countries should see travel restarted first and whether the R number - which measures the reproduction rate - or the numbers diagnosed, dying or hospitalised should be used in making determinations.

The Government will also consider whether or not to lift restrictions on parts of certain countries. Such a move might see travel to the Canary or Balearic Islands resuming before trips to the Spanish mainland are given the go-ahead.

How to manage travel to and from Britain remains problematic but the Government is understood to have decided against allowing free moment. “I don’t think we will see any easing of the restrictions on travel there for some time,” the source said.

The Government is acutely aware of the dangers of importing new cases of Covid-19 into parts of Ireland that have been clear for weeks if the doors are opened to overseas tourists too quickly. “That would be the nightmare scenario,” the official said.

The chief executive of the Irish Travel Agent’s Association Pat Dawson said he did not anticipate restrictions would be lifted until July 16th with air bridges initially likely to cover only a handful of countries.

He said his members had not seen a surge in holiday bookings for July although there has been an uptick. “Most people who are booking are not doing so for next week but for middle to late August with people focusing on Greece, Malta, Spain, the Balearics and the Canaries.

He suggested that it “would be at least two months” before the US was able to reopen and expressed concern over the “many mixed messages coming from the UK”.

While he said the Government would “have to move now or the season will be over”, he stressed that fears over acting too fast were understandable.

“We do have to be careful and a spike could set us back six months. We will probably see air bridges to only a few countries, almost as a trial. We will see how it works for a couple of weeks and make sure we are in a position to shut it down if it’s not working,” Mr Dawson said.