Q&A: Can I go on my summer holidays now? 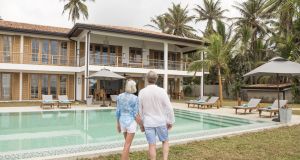 Even if the task force’s recommendations are accepted there will still be large parts of the world that will be inaccessible. Photograph: Getty Images

We’re all going on our summer holidays, are we?
Well, not just yet. But it is looking a lot more promising that at least some people will be able to jet off to the sun in the weeks ahead after a State-appointed task force recommended that the Government remove the Department of Foreign Affairs’ advisory warning against unnecessary travel overseas and scrap the Covid-19 quarantine on incoming passengers by the start of July.

What are the restrictions again?
Well, as it stands the Government is advising people against travelling overseas and anyone who ignores that advice and travels anyway will do so without the safety net of travel insurance. It is almost always voided in such circumstances. The Covid rules as they currently stand also mean that anyone travelling into the State after a holiday overseas would have to quarantine for 14 days upon their return. And visitors from overseas are not really in a position to come here either unless they fancy spending their two-week holiday in quarantine in a hotel room.

What has changed?
As yet, nothing, but the Taskforce for Aviation Recovery has said travel restrictions must be eased and the Government must clarify the quarantine rules to “facilitate” its lifting by July 1st. “A 14-day quarantine period makes non-essential and discretionary travel challenging and inhibits business-related travel, which is critical for the Irish economy,” the report says.

Is there more?
The report notes recommendations from the the European Commission which called on member states to lift border restrictions by June 15th. “Ireland is now significantly behind other member states in this regard, despite having equivalent or even better success in containing Covid-19,” the taskforce says and it points out that if Ireland “is to rebuild connectivity, effective ways to stimulate airline capacity, domestic and international routes will need to be explored,” it says.

Anything else?
Yes, it wants the adoption of a national Code of Practice for Safe Air Travel. That would see protocols developed by the European Centre for Disease Control (ECDC) and the European Aviation Safety Agency (EASA) put in place here. “A code, aligning with the ECDC and EASA protocols, needs to be urgently concluded and published,” it says. “This urgent conclusion and publication of the Code of Practice should then facilitate its implementation ideally by 1 July 2020.”

Remind me what this task force is?
It is a group appointed by the Minister for Transport, Tourism and Sport and made up of representatives of the aviation sector including the airports, the airlines, the tourism industry, workers’ unions, as well as representatives from Government.

So, not exactly impartial bystanders then?
No, almost all of those on the task force have skin in the game, which is why the recommendations are hardly a surprise.

What happens next?
Well, Shane Ross will bring the report to Cabinet on Thursday and it will consider what the report says and make a recommendation, which will then be binding. It has fast-tracked many other elements of the exit from lockdown but moved very little on overseas travel.

What has Mr Ross said about it?
He commended the committee for “very succinctly” capturing the importance of the aviation industry and said the interim report “very clearly sets out the case for taking steps to begin opening up to international travel sooner rather than later”. He added the caveat that are “of course important public health issues to be considered, which the report acknowledges, and I will give the matters my priority attention and ensure that they are considered as a matter of urgency by the Government.”

What has the reaction been to the report?
Well the Daa – which used to be known as the Dublin Airport Authority – was very fast out of the blocks. “Tourism, trade and foreign direct investment are key elements of the Irish economy and over the medium-term, aviation will play a major role in helping the Irish economy to begin to recover from the financial impact of the Covid-19 pandemic,” Daa chief executive Dalton Philips said.

The chief executive of Aer Lingus, Sean Doyle, said “Ireland’s failure to take steps that other European Member States have already taken has exacerbated the crisis in Irish aviation” and he warned that it was “having a negative impact upon jobs within the industry and upon the industry’s ability to recover.”

Ryanair welcomed the report. Chief executive Eddie Wilson said the airline “calls on the Government to implement its own taskforce recommendations to save what’s left of the summer season and start to recover lost airline traffic. A great number of the 140,000 Irish jobs which rely on aviation may be lost forever if these measures are not adopted without delay.”

Welcoming the report. Irish Travel Agents Assocation chief executive Pat Dawson said Ireland was “ significantly behind other EU member states in lifting travel restrictions”. He said the travel sector had been the hardest hit and “will be the last industry to get a restart date”. Mr Dawson said “using contact tracing measures is a much more beneficial solution”.

But will travel be safe now?
Is anything ever 100 per cent safe? People will obviously have concerns about travelling and passing through airports and sitting on planes just they have concerns about supermarket shopping and going to Penneys. These are the times in which we live. Airlines and airports have put in place extra sanitization measures and social distancing will be imposed where possible, while airport authorities and airlines want passengers to wear face masks. “We’re strongly recommending that you wear a mask because if you’re flying you have to have a mask. If you come to the airport without a mask we will have them available for sale, but really our recommendation is people travel with them on,” Mr Philips told RTÉ radio today.

But travel has already resumed?
It is certainly busier than it was weeks ago. On Sunday around 4,000 passengers passed through Dublin Airport, a fraction of what it normally would be but considerably higher than it was at the height of the crisis.

And airline schedules are being ramped up?
That is certainly the case. The race to take flight again has been led by Ryanair which has said it has seen a “surge “ of bookings from Irish holiday makers for July and August.

So, does this mean I will be be able to travel where I want?
Absolutely not. Even if the task force’s recommendations are accepted by cabinet there will still be large parts of the world that will be inaccessible, but many, and possibly all, EU countries could be able to receive travellers from Ireland within days.

I have heard that there has been a spike in Covid-19 cases in Germany?
There has been and it has caused the alarm bells to ring across the EU. The reality is that the situation is still very uncertain and the crisis has in no way passed despite what may happen next.

I don’t really want to travel even though I have a holiday booked for the weeks ahead. What can I do?
Disinclination to travel is not something that is typically considered by airlines or by tour operators. If you do not show up for a flight that takes off, you will lose your money. There are no two ways about it. The best option for people who are wary of travelling in the current climate would be to try and amend bookings to a future date. It is also worth making contact with tour operators to see what their policies are. While they can insist that money paid now is non-refundable and say that if people chose not to travel then that is their look out.

However many such companies may choose to play the long game and accept that many customers and clients will be too scared to travel this year and allow them to move their bookings to next year. Such a move would most likely foster a degree of good will and loyalty that will otherwise be destroyed.