‘I just want to get trading. I have been sitting on my butt since March,’ says one manager 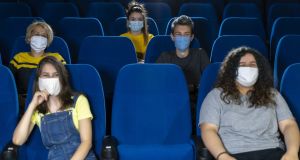 ‘We can put up all the signs we like, but if the public don’t embrace it this doesn’t work.’ Photograph: Getty Images

The government’s recent, unexpected announcement that cinemas could open from Monday, June 29th will not trigger anything like an immediate return to normality. Social distancing will greatly restrict reduce maximum capacities. Only a trickle of new releases will arrive over the next month. Such are the challenges that just one cinema chain is set to open its doors immediately.

Graham Spurling, director of the Movies@ franchise, confirms that his venues will be welcoming back punters from Monday. An array of classic titles and early 2020 releases are already on sale for venues across the country. Animated gem The Iron Giant will kick things off in Movies@Dundrum at 11.10am. Films showing at Movies@ cinemas in Gorey, Dungarvan and Swords include Bad Boys for Life, A Star is Born and Trolls World Tour. “From my point of view, I just want to get opened,” Mr Spurling told The Irish Times. “I just want to get trading as a cinema. I have been sitting on my butt since the 18th of March by and large.”

Other chains are taking it more slowly. Mark Anderson, director of the Omniplex Group, which operates some 30 venues across the island, explained the company’s thinking. “We are starting our graduated re-opening from Friday 3rd July with seven key locations in Dublin, Cork, Galway, Limerick, Arklow and Wexford as well as our new brand new four screen, D’LUXX, cinema in Drogheda, ” he said. “We hope to have reopened all eighteen Republic of Ireland cinemas by July 24th, but have real concerns about the viability of remaining cinemas with two metres of social distancing.” The Northern Executive has yet to announce opening dates on the other side of the border.

The Irish Film Institute and The Light House in Dublin and Pálás in Galway are not yet accelerating their opening plans. Until last Friday, they were working to the Government’s previous opening date of July 20th.

“Essentially we are still in a holding pattern,” David O’Mahony, head of programming at the IFI, said. “We won’t open until we are sure we have robust procedures and we are sure we can let people back into a safe environment. We are not going to drop everything and open.”

Charlene Lydon, programmer for the Light House and Pálás, made similar arguments. “We may find that we can open quicker, but, as it stands, it’s still July 20th. We are not going to be open on Monday,” she said.

The challenges for those cinemas opening early are enormous. First, there is the question of reduced capacities. Most venues were making an informed guess that social-distancing would, by July 20th, be reduced to a more manageable one metre. The distinction is greater than you might think. Under current regulations, if a punter buys just one ticket that renders another 11 surrounding seats unsaleable.

It is estimated that exhibitors need around 30 per cent of capacity to make a profit. A house of 68 per cent would be perfectly respectable for most films. One can understand why not every cinema is rushing back into business.

“I have a good deal on my movie percentages. Those costs are lower than they would be usually,” Spurling said (referring to the amount returned to distributors). “I can afford to bring back my staff because I get the 80 per cent from the Covid relief payment. So I am only paying my staff 20 per cent on balance. That will hopefully get us through to August when that runs out. I don’t mean to sound naïve, but I made a decision within 10 minutes that we were opening.”

Then there is the difficulty of finding films to screen. Distributors suspended the theatrical release of movies when lockdown struck. Some modestly attractive mainstream films are set to emerge in July. Black Water Abyss, a horror film, arrives on July 4th. Unhinged, a Russell Crowe movie, opens on July 17th. But the cinemas expect no rush to new material until Disney’s Mulan lands (they hope) on July 24th. Christopher Nolan’s Tenet, an epic tech thriller, is scheduled to open a week later. Those releases could, however, be delayed if there is any fresh spike in infections.

Even those cinemas opening closer to the original date will be relying on older material. “We will be playing some of the films that didn’t get to open - films like Vivarium, Sea Fever,” Lydon said. “Also films like Parasite, Calm With Horses and The Lighthouse, films that still had plenty of life in them.”

We are blocking off seats in units of ones, three and fours. But we can’t legislate for people going to the loo. We can put up all the signs we like, but if the public don’t embrace it this doesn’t work

Spurling admits it will be difficult balancing the books until those mainstream behemoths make their belated appearance. “We will be fine for the first 10 or 11 days because it will be new,” he said. “We are looking closely at the first four days because we will be the only cinema open.”

Cinemagoers will also be concerned about safety. All cinemas are training staff to enforce the current regulations. Perspex screens are being fitted in venues. There will be larger than usual gaps between screenings to allow for rigorous cleaning of venues. Spurling confirms that concessions such as popcorn and pick’n’mix sweets will be on sale. “We can do that hygienically as the supermarkets do. The popcorn doesn’t get handled,” he said.

A cursory consideration of the social-distancing procedures does kick up some unavoidable difficulties. The owners can fairly easily scatter customers about the venue, but if somebody at the centre of a row wants to go to the lavatory they will have to fight past anyone sitting on an aisle. None of the venues said they would be able to entirely remove unused seats.

“We are blocking off seats in units of ones, three and fours. But we can’t legislate for people going to the loo,” Spurling said. “It’s important to say that we can put up all the signs we like, but if the public don’t embrace it this doesn’t work.”

Wider uncertainties remain. Nobody is sure when the social distancing rules will be slackened. It is not impossible - watch what happens in China - that Mulan and Tenet will be delayed yet again. Who knows if audiences yet have the urge to sit together in enclosed spaces.

“I may have it completely wrong,” Graham Spurling said. “I am loathe to use the word ‘confident’. But I do feel people want to go back to the cinema.”

7 What links Dido, Grafton Street and the Progessive Democrats?