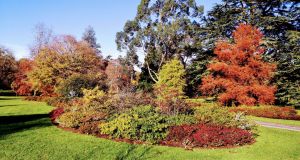 There is much to explore at Blarney Estate, Co Cork

Cork men, having already the Gift of Eloquence, have no urgent reason to visit Blarney to kiss the famous stone. Generally, it is regarded as a brilliant ploy to attract taciturn tourists. The word “blarney” is said to have been first used by Robert Cecil, or possibly Queen Elizabeth, when confronted with a slew of letters from the McCarthy clan, who had been ducking and diving to hold on to their lands in Muskerry for two centuries. Their missives were described as “being all Blarney”.

In my search for conifer-less looped walks I decided to finally visit the castle and estate on a sunny November day; the ideal time of the year for a stroll through deciduous woodland. When I looked at the map of the 60-acre estate, with its 10km of pathways, I realised I had hit the jackpot.

The first sight of the castle, viewed through a tree-lined avenue of seasonal colours, was entrancing. I opted to climb the narrow winding stone staircase to get an overview of the demesne. I must have exuded my Corkonian disdain as I was not approached by the guardians of the “Stone”. The ascent was worth it though, as I gazed out over a palette of autumnal hues.

Descending, I headed off through the “Groves of Blarney” and decided to traverse a circular route around the periphery first. It being a weekday afternoon outside the tourist season, I had the place to myself and made slow progress as I frequently stopped to view the many exotic features. The first was a rocky grove of ancient Yew Trees whose roots clung to the limestone outcrops. This is a mystical place with many legends attached to it.

I had bought a worthwhile coloured brochure at the entrance, which gives more details of the features and allowed me to name the more spectacular trees, such as the massive Western Cedar and, possibly, the tallest Monterey Pine in Ireland. There are sculptures scattered around to add further interest.

I next came upon a large rock from which a curtain of water dripped into a pool largely covered with green algae; a scene straight out of a fantasy film. Further on I reached a large lake encircled with golden beech, which came down to the edge and on the still surface it looked as if an artist had painted them upside down. A wooden jetty has been built out over the water; a perch to muse in sweet isolation.

Next, I came upon a most atmospheric Fern Garden complete with a little waterfall, which added to the enchanting atmosphere.

From there, I meandered on to paths leading to the Irish Garden and its collection of rare and endangered native plants. Finally, I passed through the Poison Garden, where I was tempted to nick a few leaves for a couple of people I would like to dispatch to a well-earned eternity.

The walk had been a series of sensual surprises and I will return to see what further delights await in the other seasons.

Start and finish: Entrance to the estate on south west corner of Blarney Square.

How to get there: Take the N 20. Cork-Mallow Road. Slip road for Blarney is 7Km from city.

Time: As long as you want.