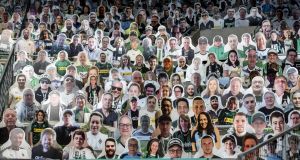 Cardboard cut-outs of Borussia Mönchengladbach fans fill their stadium for the return of the Bundesliga. Photograph: Christian Verheyen/Borussia Moenchengladbach via Getty Images

With no Eurovision song contest this evening, the Bundesliga’s return on Saturday – the first major European league to loosen its Covid-19 lockdown – could open a new chapter in pan-European integration.

When players from Dortmund, Bayern Munich and other teams turn out this weekend, they know they are playing now for a wider audience than usual of soccer-starved fans.

“If the Bundesliga is the only league around the world to be broadcast on TV, then I assume that we will have an audience of billions all over the world,” said Karl-Heinz Rummenigge, the German soccer legend and chief executive of Bayern Munich, to Sport Bild.

“This will not only be an advertisement for our football, for the Bundesliga, but for the whole country and especially for German politics, which made this possible with its very good approach.”

Germany’s early solo run on virus testing, and a death toll of nearly 8,000 that is shocking but modest compared to its neighbours – helped the country’s leading soccer clubs make a successful case for restarting the league with health authorities.

But, as with others games, the first match – 2.30pm Irish time on Saturday between Borrusia Dortmund and FC Schalke – will be a ghostly affair, with just 69 people watching from the stands in an 80,000 seater stadium.

“The matches will feel different [and] after the first matchday we will all know why we prefer games with fans,” said Christian Seifert, chief executive of the German league (DFL), who warned of cumulative club losses of €760 million if the season was written off.

Bayern, with 29 championship titles , lead the table but Dortmund are in hot pursuit. RB Leipzig and Borussia Mönchengladbach are also within reach of the top two with nine games remaining.

Despite the goodwill towards the Bundesliga, many in Germany are sceptical that the “hygiene measures” in place are workable. Hertha Berlin suspended forward Salomon Kalou for a video showing him shaking hands with team-mates in the dressingrooms. On Thursday, Augsburg trainer Heiko Herrlich confirmed he would be absent this weekend after breaking quarantine to buy toothpaste and face cream.

Some suggest the league may soon be halted again and a public television poll found 56 per cent of respondents critical of restarting the league and just 31 per cent in favour. Many players are quietly concerned, too.

“As far as I know we weren’t even asked, if we had there might have been many questions,” said Marco Hartmann of 2.Bundesliga side Dynamo Dresden. Two of his team-mates tested positive this week, cancelling the team’s match against Hanover on Sunday.

Germany’s player union VDV says it has been flooded with queries from its 1,300 members.

“In many areas of this there was no real co-decision-making from players and this has to change,” said VDV chief executive Ulf Baranowsky.

Across the country, German police will be working weekend overtime as usual on match days, but this time to prevent fans gathering outside stadia to cheer on their side.

Beyond the matches themselves, German broadcasters and newspaper sports reporters are wondering how to adapt their coverage to fan-less football – not as an interim but, potentially, a new reality.

“Is football without fans in the stadium still football?” asked the Rheinische Post daily, suggesting a new reporting aesthetic may emerge closer to a narrative film. “We’ll have to leave behind the familiar pictures of what goes on around the match”.

Anticipating the deathly silence, match broadcaster Sky is offering viewers on its website the chance to watch the match with natural sound or with recorded crowd chanting.

But no tricks will be on hand to recreate handshakes, hugs, spitting, whispers to goalkeepers or shouts at referees.

Prof Gunter Gebauer, a leading German sports sociologist and philosopher, sees the restarted Bundesliga as a triumph of lobbying.

Though a life-long football fan, he is skeptical that fan-free Geisterspiele – ghost games – will work.

“I fear these matches, taking place in laboratory-like conditions,” he said, “will not bring much joy, perhaps no joy at all.”

German politicians, aware they are taking a risk with restarting the Bundesliga, have warned that failing to meet their own hygiene standards will force a cancellation.

“The conditions have to be met,” said Markus Söder, state premier of Bavaria and a life-long Bayern Munich fan. “And it has to be made clear to every player and trainer what’s depending on this.”

This weekend’s fixtures and TV details