The Irish Times view on emerging from lockdown: Normal people and a bygone era

So many things we did not think about are now open to the biggest question: why is that the way it is? 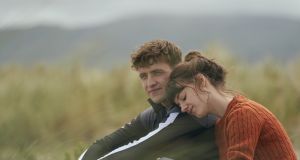 Paul Mescal and Daisy Edgar Jones in Normal People. ‘Watching the series we find ourselves shocked, not at the sex scenes, but at all those breaches of social distancing rules: the packed student parties, the groups hanging around together.’ Photograph: Enda Bowe/Element Pictures

It is a nice irony that the must-watch TV series of the lockdown period is the screen adaptation of Sally Rooney’s Normal People – which is precisely what none of us can be now. Even as we watch a drama so recently made, we find ourselves shocked, not at the sex scenes, but at all those breaches of social distancing rules: the packed student parties, the groups hanging around together, those epic voyages from Sligo to Dublin and back. This world is so strange now that we might as well be watching a costume drama based on a Jane Austen novel.

Lines from another novel, L.P. Hartley’s The Go-Between are so often quoted that they verge on cliche: “The past is a foreign country. They do things differently there”. Right now, though, they have fresh meaning, for this past when we did things differently is only a few short months ago. The early weeks of 2020 belong to a foreign country that had its own customs and rituals: football matches and hair salons, nail parlours and big funerals, fun fairs and fancy weddings, foreign holidays and handshakes. They were normal once.

Maybe they will be again. But even as Ireland very tentatively emerges from lockdown next week, we know that it will be a very long time before we can take any of this for granted. The job of art is to make familiar things seem strange and strange things familiar. In this sense, coronavirus is an artist, albeit one we would much prefer not to know. It has made ordinary habits – going for a walk, buying groceries – peculiar, and outlandish ones – wearing face-masks, shouting across the street to our neighbours – mundane.

We would not have wished any of this on ourselves and the cost in grief and money is fearful. But if there is anything to hold on to as we slowly re-emerge into social and economic life, it is the heightened awareness that comes from this overturning of assumptions. We now see everything with new eyes. It is not just the haze of pollution that has been cleared from the air, it is the fug of familiarity. So many things we did not think about because they were merely normal – from the traffic on the roads and the distances we commute to the way we value work – are now open to the biggest question: why is that the way it is?

This, at least, is worth salvaging from the experience of the past few months. The obvious way to think about those months is that we have been in a kind of sleep. But one might also say that we were sleepwalking before and are now awake. We walked semi-consciously through a landscape we accepted because that was the way things were: injustices, divisions, ways of working and planning equally inimical to family life and the environment. We are, of course, desperate to get back to work and play and travel and sociability. But in that desperation, we should try not to lose the heightened awareness that much of what we did before was not good for normal people.