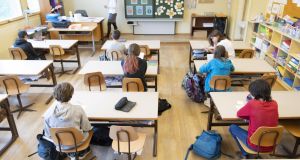 A primary school class at the Etablissement Primaire de l’ecole vaudoise, in Morges, Switzerland. It is one of a number of European countries which reopened schools this week. Photograph: Laurent Gillieron/ EPA

Parents’ representatives have called for primary schools to be reopened as soon as possible in line with public health advice.

While schools are not due to reopen until September, the National Parents’ Council - Primary said it hoped public health advice would be kept under constant review over the coming weeks.

“Our view is that schools should return as soon as possible for certain cohorts, such as children in transition, in line with public health advice,” said Áine Lynch, the council’s chief executive.

“If it is possible for those cohorts to return for a limited period of time in June, that would be great, but only following the advice.”

There have been growing calls this week among parent groups on social media for schools to reopen earlier than planned.

They were prompted in part by the reopening of schools across a number of European countries this week and Taoiseach Leo Varadkar’s comments that resuming school was “among the safest things” the State could do over the coming months.

Ms Lynch said the council was receiving many calls from parents who either supported reopening schools earlier or were worried about the prospect of doing so.

“There is a cohort who are very anxious about it . . . we’re also hearing from many who are worried about their children’s social and emotional wellbeing. Even with the same parents, some feel are feeling both of these things,” she said.

Mary Brunel from Inchicore in Dublin and the mother of a sixth class pupil is one of a group of parents who set up a petition online calling for schools to reopen for pupils in their final year of primary school.

“My daughter Zoe (12) has coped well so far, but when she heard schools weren’t going to reopen she was devastated,” she said.

“Sixth class is such as crucial year. They are facing into a huge transition. From a mental health point of view, they need to be physically brought back together to give them closure and prepare for the future.”

However, the Department of Education says it is not planning to reopen schools prior to September and will be guided by the ongoing advice of the National Public Health Emergency Team.

“Engagement is under way with stakeholders in the education sector to develop contingency plans for the reopening and operation of schools in an environment that may require social distancing and other public health requirements,” a spokesman said.

Dr Aoife Ní Sheaghdha, a Dublin-based GP and mother of three, said she believed there was now enough evidence available to allow schools to reopen safely.

“There is no medical evidence that children are at a high risk of transmitting Covid-19 to themselves or others. It made sense to close schools at the start of the lockdown as there were fears they would be super-spreaders, as they are with normal flu,” she said.

“Denmark opened its schools a few weeks ago and they haven’t reported a spike in numbers. In fact, they are still going down.”

She said decisions to reopen schools needed to balance public health advice with the potential harm of long-term school closures to children.

“We are seeing parents whose children aren’t sleeping and are anxious. Children thrive on socialising with friends. They learn through play, not through laptops,” she said.

“School can be a safe haven’t for many children with meals and breakfast clubs. Teachers often spot issues or learning disabilities first. That has all stopped.”

This week, teachers and school managers underlined the scale of work that remains to be done before they believe schools can reopen safety.

They said primary schools may need to reopen on a phased basis with smaller class sizes and pupils attending on certain days of the week.