More to Irish bees than honey, hives and dancing 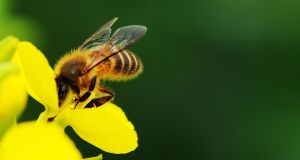 The most familiar bee in Ireland, Apis mellifera mellifera, is the aptly named honeybee, striped black and amber, it is only slightly furry and a little over a centimetre long. Photograph: NUI Galway

That simple statement, which briefly had another life as the name of an almost-famous Irish pub rock band in the 1970s, is probably our first thought when it comes to these charismatic and fascinating insects.

But it’s not true. Or rather, it is not true of most of the 20,000 bee species in the world, nor of most of the 101 species found in Ireland. Most of our 21 bumblebee species do make honey, but not in quantities or forms that could be harvested by us.

Dozens more species of solitary bee collect pollen or, like cuckoos, leave their eggs to hatch and thrive in the pollen-stocked nests of other species. But they don’t make honey.

We also tend to think of bees as social animals, living in highly populated hives made up of thousands of female worker bees, some male drones, and a single queen, and periodically taking off in swarms to occupy new hives.

And we may be aware of particularly dramatic aspects of bee behaviour, like their ability to communicate the location of food sources to their hive-mates by ‘dancing’. They move rhythmically in a manner that indicates distance, and at an angle to the sun, at that particular moment, that indicates direction.

It’s not surprising that we associate all these behaviours with bees, because they are characteristic of the most familiar bee we see in Ireland, Apis mellifera mellifera.

This is the aptly named honeybee, whose ubiquitous worker is striped black and amber, is only slightly furry, and a little over a centimetre long. It’s the only one of our bees that makes harvestable honey, lives in large colonies, and dances.

Humans in Ireland have had such a long and intimate relationship with this species that we now appear to have very few honeybees living truly in the wild.

Jane Stout, a bee expert who directs TCD’s Biodiversity Centre, and is deputy chair of the All-Ireland Pollinator Plan, says that there are no reliable figures available for the number of wild hives. Whenever you see a honeybee anywhere in Ireland, then, it’s almost certainly from a hive owned by one of 3,700 beekeepers.

Our beekeepers come from a very old tradition. So old, in fact, that the Brehon laws dealt with the rights of beekeepers (and of their neighbours) in extraordinary detail. Until the spread of cane and beet sugar to northern Europe beginning three centuries ago, honey had huge economic importance as a sweetener, preservative and medicine, and the laws reflected that.

But the Brehon “Bee-judgments” showed a sensitivity to sharing the benefits of ‘ecosystem services’ that we might learn from today.

If you found a swarm in an open area around a neighbour’s house, and succeeded in transporting it to a hive of your own, you had to give three quarters of the produce to your neighbour. But if you found it in a tree, you could keep half of it. And if you found it on common land, you just had to give one ninth of the honey to your local chieftain.

But since your bees, wherever you found them, were probably gathering nectar from land beyond your own, you usually had to give a small amount of honey to your four closest neighbours.

The Brehon laws also regarded the bees themselves as having a kind of legal status. Echoing a custom found in the Basque countryside until the 19th century, bees had to be informed of the death of their owners, and funeral sweets had to be left beside the hive.

In more recent times, the Irish Beekeepers Association was founded in 1881, and a decade later the Congested District Board very actively promoted beekeeping as a cottage industry to relieve poverty. The board developed the first standardised hive made in these islands, and a ‘CDB hive’ is still manufactured in Donegal today.

Many of today’s beekeepers are hobbyists rather than commercial producers, but it is often a consuming passion. TCD librarian Susie Bioletti initially wanted to keep bees at her Dublin home, but it was too small. She found an organic farmer, Kitty Heslin, who was happy to accommodate her hives on a beautiful site on Wicklow’s Calary Bog.

That means a weekly commute to check on the bees, often with a more experienced mentor, Maeve Clissman, who keeps bees in Enniskerry. Joining the three women on the farm recently, it’s clearly a social activity that also involves getting out in the open air in all seasons, and observing subtle changes in weather and plant growth as they affect the bees’ behaviour.

Bioletti says she was first motivated to keep bees by concern that our pollinators were declining, but says she is now also driven by a fascination with the honey-production process, and also by a relationship with the bees themselves, which the Brehon law makers might recognise.

“They are your babies,” she says. “When I’m in the city on a cold night, I keep wondering how they are doing.”

Observing how she is feeding the bees with sugar to sustain them during the winter – though never during the honey production period in the spring and summer – I describe them as “domesticated”.

“We don’t domesticate bees. They do exactly what they would do in nature. We just manage them.”

The behaviour and life-cycle of honeybees is so fascinating, and the challenge of producing good honey so engrossing, that it is easy to see why bee-keeping is becoming an increasingly popular pastime, and occupation.

Interestingly, though, Jane Stout expresses doubts as to whether its growth in Ireland is helping to save Ireland’s 100 other species of bees.

“Fifty per cent of our species are in decline,” she says, “and 30 per cent are threatened with extinction. The honeybees are certainly being looked after, they are still doing okay. But our bumblebees and solitary bees are in trouble, and we need to do a lot more for them. It’s possible that the increase in bee-keeping may actually undermine other native bee populations, through competition for scarce resources.”

She is also sceptical of the notion, which has had quite a lot of traction in the media, that a single factor, the controversial neonicotinoid insecticides, is responsible for the dramatic declines we have seen in bees in Ireland and internationally.

“The ‘neonics’ are a problem, of course,” she says, “but they are just part of a lethal cocktail that is causing losses: herbicides, fungicides, invasive species, novel diseases and climate change. But above all, the problem is habitat loss and fragmentation, the loss of the plant populations that need bees to pollinate them, and that bees need for food.”

So the best thing you may be able to do for our native bees is probably to create spaces for native wildflowers, as Sylvia Thompson described on these pages recently. And if you want to get involved with the extraordinary life-cycles of these amazing insects, you could also become a bumblebee monitor, doing some citizen science for the National Biodiversity Data Centre and the Pollinator Plan (see panel).

Bee aware: routes to a world of insect wonder

‘The State of Ireland’s Bees’: very readable online booklet on our less familiar bees from the National Biodiversity Data Centre:

The All-Ireland Pollinator Plan, including links to monitoring and recording opportunities, and posters on the life-cycles of solitary bees and bumblebees:

Find information on a bee-keeping association near you: