City breaks: 10 gems beyond the obvious

Nothing wrong with the classic spring city break, but other options give you more bang for your buck 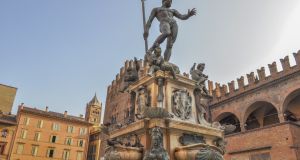 You made it through January, it must be time to reward yourself by planning a weekend away in the spring. There is nothing wrong with the classics – springtime in Paris, a rugby weekend in Rome, see the latest show in London – but beyond the obvious there are lots of options that give you more bang for your buck, have fewer tourists and earn you better bragging rights back home.

Smaller, less busy and regarded as the gourmet capital of Italy (which is saying something!), Bologna has direct flights from Dublin with Ryanair, and is a short taxi ride from the airport to the compact city centre. Once there you discover streets lined with porticos, the oldest university in Europe (founded in 1088) and Le Due Torri – twin towers build in the 12th century, one of which can be climbed on a rickety wooden staircase to amazing views over the whole ancient city. If the great local restaurants and food markets aren’t enough, you can visit the largest food park in the world, Eately World, to sample food, drinks and learn how to grow and cook Italian food.

Where to stay: The ZanHotel Tre Vecci is a traditional hotel in a lovely street in the city centre. I Portici Hotel is a luxury design hotel in an ancient building, where you will feel as chic as the Italians who frequent its gourmet restaurant.

Try Lyon rather than Paris

With a population of just over half a million, the UNESCO world-heritage city of Lyon is perfect for a city break. Aer Lingus will take you to Lyon in just over two hours, where you can experience its 2,000-plus years of history through the Roman amphitheatre, the medieval cathedral of Saint John and the Opera Novel. The cuisine of Lyon is renowned (salade Lyonnaise anyone?), and a “bouchon” is a traditional Lyonnaise restaurant serving locally-made sausages, pates and coq au vin with wine from nearby Beaujolais or Cotes du Rhone.

Where to stay: Le Phenix Hotel is a quaint hotel in a central location providing good value. Cour des Loges is a stylish hotel with a top-class restaurant in an inner courtyard.

Take a dip in Bath and skip London

Only 100 miles from London but feeling like another world, the Roman city of Bath is well-sized for a weekend visit – the main sights are all within easy walking distance from each other (perfect for strolling around in its Georgian heyday). Visit the Roman baths in the morning, have afternoon tea at the famous Sally Lunns (since 1680, though the building is even older) before walking to see the stunning Royal Crescent of houses overlooking Bath. The Jane Austen museum and the Pulteney Bridge, with its shops along both sides, will entertain you for another day, and you can finish your weekend with a visit to the modern Thermae Bath Spa close to the Roman baths.

Where to stay: The Royal Crescent Hotel & Spa will provide the quintessential Bath experience, while the Francis Bath Hotel is a quirky play on traditional English glamour.

Swap to Seville from Barcelona

A direct Ryanair flight to Seville, a short taxi or bus ride to the city and you could be enjoying tapas in the oldest bar in Seville, El Rinconcillo. They still manage your bill in the traditional way – by writing what you order in chalk on the bar before giving you a total then wiping it away. The next day you can visit the stunning Real Alcazar, with it’s amazing moorish tiles and gold-domed ceiling ( a recent location for Game of Thrones) or the beautiful 13th century cathedral, the third largest church in the world and a Gothic masterpiece. A visit to the Plaza de Toros (bull-ring) and then it’s time for more tapas.

Where to stay: the EME Catedral Hotel is very chic, with views of the cathedral from the rooftop bar. The H.Boutique Voluve, a budget option, is in a great location, and also has great views from its rooftop terrace.

Time for Turin and forgo Milan

Torino (Turin), was briefly the first capital of the unified Italian kingdom (1861-1865) but its many grand piazze and palazzi are mostly thanks to the Royal House of Savoy from France. The Mole Antonelliana stands proudly overlooking the city, but you don’t have to climb to the top to see the snow-capped Alps, which are visible from the streets of Torino. The grand cafes of the city will serve you a local “bicerin” – a delicious if heavy combination of espresso, drinking chocolate and hot milk – or you can order one in the original Lavazza cafe, from where the now-famous coffee company started as a grocery shop in the 19th century.

Where to stay: The luxury Grand Hotel Sitea will make for a relaxing weekend, while Hotel Roma E Rocca Cavour is a well-situated hotel in an old Turino

building at a good price.

While there are currently no direct flights from Dublin to Bruges, the flight to Brussels is short and a one-hour train journey will bring you to a city where everything you need for a great weekend away is only a walk away. Cruising the Bruges canals or taking a horse-drawn carriage will make it even easier to visit the Basilica of the Holy Blood or to climb the 12th century Belfry, before stopping for some frites (with mayonnaise of course), some chocolate or a local beer.

Where to stay: Both the Grand Hotel Casselbergh Bruges and the Academie Hotel have stylish rooms in historic buildings in the compact city centre.

Munich is famous for Oktoberfest, but the smart time to celebrate beer in Munich is between March 15th and April 6th this year, when the locals celebrate “Starkbierzeit” (the “strong beer festival”). You can visit the Marienplatz square with its famous glockenspiel and the Frauenkirche Cathedral during the day, then join the after-work fun in the brewery marquees from 6pm. Typical bavarian food features lots of meat and dumplings to soak up the beer, and pretzels make a filling snack.

Where to stay: Hotel Kempinski Munchen is a luxury stay right in the heart of Munich. Vi Vadi hotel is budget-friendly in a good location, with a good selection of room types.

La Cite de Carcassonne is actually more a castle than city – it perches above the lower town, inviting you to stroll around. A short Ryanair flight away, it is perfectly sized for a weekend of walking along the ramparts of the medieval city or boating on the Canal du Midi, created in the 17th century to link the Mediterranean and the Atlantic. The wealthy past of Carcassonne is obvious in the 16th and 17th century mansions along the Bastide Saint Louis...and then there are the local vineyards to explore.

Where to stay: Hotel du Chateau is atmospheric and well located, or for a more local experience AirBnB has a selection of compact apartments located in La Cite.

With everyone planning trips to trendy Lisbon, hop on a Ryanair flight to Porto to avoid the crowds. Cross the spectacular Dom Luis bridge (designed by Gustave Eiffel) to visit the port cellars in Vila Nova de Gaia, and catch the views of Porto from the other side. See the Livraria Lello & Irmao bookshop which inspired the Hogwarts library or visit the stunning Majestic cafe before taking an historic tram – Linha 1 – along the scenic coastal route to the beach at Foz. Porto still has some wonderful independent shops to visit and prices for local goods are low compared to most European destinations. Mercado Beira Rio, near the port houses, is a perfect market to seek out Portuguese specialities after your shopping adventures.

Where to stay: The Pestana Palacio do Frexio is an opulent pousada – an historic building restored and converted to provide accommodation (similar to paradors in Spain). Porto A.S.1829 is another sympathetic conversion of an old building, but with lower rates.

Surrounded by Germany, France and Belgium, it’s easy to forget that Luxembourg, with direct flights with Ryanair from Dublin, is the perfect weekend city break. There are pre-Lenten carnivals in the spring and with the Grand Ducal Palace, the Place Guillaume II and Bock Castle to visit, you won’t be short of things to do. The Parcs de la Petrusse are parks along either side of the Petrusse river, and make a lovely way to cross the city below the streets. Biking is the best way to get around Luxembourg, with numbered cycle paths criss-crossing the city. Food in Luxembourg is based around fresh fish in the spring and summer, and game such as hare and boar in the winter, and while influenced by its neighbours it has a cuisine of its own to discover.

Where to stay: Hotel Le Place d’Armes is a lavish hotel with two restaurants in the Haute Ville area of the city. For something completely different, AirBnB has a “little cabin in the woods”, a 15-minute bus journey to the city, complete with Nespresso machine and sparkling wine from Luxembourg.