Learning the art of travel conversation

The long road home: I think I may have struck upon the best ice-breaker conversation starter in the world 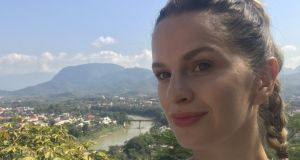 Fiona Hyde on top of Mount Phousi in Luang Prabang, Laos. You can add that to the list of places she’s been

For me, one of the most surprising things about travelling is how boring some of the conversations you wind up having can be. With locals and fellow backpackers alike, there’s well-trodden conversation that happens – where you’ve been? where you’re going? how long do you plan to be on the road? Poke your head into any hostel dorm in Europe, South America and southeast Asia and you’ll hear travellers reciting lists of countries at one another like they’re reading out strange shopping lists. Quite frankly, it can be dull.

Who cares if Francisco from Brazil has just come from Ho Chi Minh City and plans to head into Laos next? He may as well tell me in detail what he ate for breakfast for all it’ll add to my day. I just don’t need to know, Francisco.

(A close second to swapping a rundown of places traversed/yet to go to is exchanging war stories of the worst overnight bus journeys in the region, replete with thousand-yard stares. Dark but ultimately samey tales of theft, intrigue, winding roads and vomit. So much vomit.)

Of course, I’d take those repetitive and slightly tedious conversations any day over the more challenging ones where my fellow travellers try and tackle the lofty subject of Ireland. Ireland is very small in the grand scheme of things, so I understand there not being a huge degree of awareness out there in some camps, but it does make for interesting interactions with people who’ve only just vaguely bumped up against the subject of our existence.

In Otres, a beachside village near Sihanoukville in southern Cambodia, I find myself unburdening a young Australian of his ignorance when he asks me: “Is Ireland not a third-world country, then?” While I splutter together a response, he continues: “And I’ve heard you only got traffic lights recently when the EU and Apple gave you the money for them?” Please, my friend – go back to telling me where’s up next on your travel itinerary. Forget I said anything. I beg you.

I’ve done the other extreme too. I spent about a week in Bangkok at the beginning of my trip, back in October, and I splashed out on a private room to get my bearings and stave off the worst of jet lag. For those days in the city, I didn’t speak to a single other person, aside from to buy SkyTrain tickets or order food. It is some way to live, I’ll tell you.

I did the same for six days on a secluded beach on Koh Rong – my own personal silent retreat. By the time I staggered back to civilisation in Kampot for New Year, my conversational muscles had atrophied somewhat. To ease myself back into socialisation, I booked into a busy hostel and chose a dorm, figuring that if people are sleeping three feet away from me, they’ll be somewhat obliged to at least say hello in the morning. Talking to people after so long spent alone feels strange and stiff at first, like attempting to tell jokes in a foreign language. To combat this, I suggest finding a hostel with a bar that does happy hour.

Rather than ask the people where they’re heading to next or how long they’re in town, I’ve started cutting to the chase

But back to those hostel dorm and backpacker bus conversations. From trial and error, over a large sample size, I think I may have struck upon the best ice-breaker conversation starter in the world. It might seem a bit out there, but it really blows things wide open. Trust me on this one. So, rather than ask the people I meet where they’re heading to next or how long they’re in town, I’ve started cutting to the chase. That’s right, I’ve started asking people if they were unfortunate enough to be involved in the Uruguayan air force flight 571 crash into the Andes in 1973, immortalised in the 1993 movie Alive!, would they have eaten their fellow passengers to survive? Or would they rather perish than do such a thing and live with it forever?

I’ve had some interesting answers , as you can imagine, and some equally interesting blank or mildly alarmed facial expressions. But it sorts the wheat from the chaff in terms of international conversationalists – even if it does make some people assume I’m barking mad and ask reception to switch bunks. Sorry about that again, Francisco.