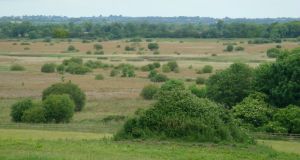 Pollardstown Fen is on the only peatland protected in Co Kildare. Photograph: Catherine O’Connell/IPCC

It’s the silence that hits me first, then the gentle span of straw coloured reeds spreading out into the distance. Soon, I notice the water gurgling from all directions – as I follow the raised boardwalk around this mystical landscape.

I’m visiting Pollardstown Fen in Co Kildare for the second time in a year. About six months ago, wildlife ranger, Lorcan Scott [now, wildlife officer with the Heritage Council] brought me on a guided tour of this hidden gem 10 minutes’ drive from the M7 motorway exit for the Curragh Racecourse. It is the largest spring-fed fen in Ireland.

I almost don’t want to write about it for fear of spoiling the beautiful tranquillity of the spot. One mother and her two young children are the only people I see walking the boardwalk on my late-winter visit, when the pale sun lights up the entire 220 hectares (544 acres).

Pollardstown Fen first developed about 10,000 years ago after the Ice Age ended. An extensive network of lakes remained through the central lowlands of Ireland at that time and Pollardstown Fen formed from this. Free-floating algae grew first and then tall grasses on the water’s edge. Over time, the dead plant matter formed as peat which eventually filled the lake basin. Sphagnum mosses grew but because of the large quantity of groundwater, it remained a fen rather than turning into a bog.

“It’s a sensitive site which doesn’t lend itself to wide ranging access for conservation and public safety reasons but if visitors stay on the boardwalk, they can have a very enjoyable visit,” says Roy Thompson, conservation ranger with the Irish Parks and Wildlife Service who manage the site.

Many readers will remember that Pollardstown Fen hit the national headlines before the Kildare bypass was constructed in 2003. A few years earlier, the then taoiseach Bertie Ahern famously mocked how a snail could hold up the building of a road.

The concern then was that the road building works which cut into the Curragh aquifer [a large span of underground water that stretches from Kildare town to Newbridge] would lower the water table and damage the fen, which is a special area of conservation under the EU Habitats Directive and an internationally protected site. The snail in question was the Geyer’s whorl snail, whose absence would mark the decline in the water levels.

The bypass was built below the water table level and then sealed up so that the aquifer could return to its former level above the new road. But, the snail disappeared from some parts of the fen due to the temporary loss of water during the building works.

Hydrologists and ecologists have been monitoring the water levels and vegetation at Pollardstown Fen since the building works were completed. “We have been trying to induce the snail to move back into sites with artificial poaching, grazing by Highland cattle and even strimming,” explains retired professor of environmental engineering at Trinity College Dublin, Prof Paul Johnston.

Johnston’s involvement with Pollardstown Fen dates back to before the road was built. “The snail was like the canary in the coal mine in that the moss species that acts as a host for the snail is formed on a calcium carbonate base (tufa) which is sensitive to seepage rates on the fen.” The National Parks and Wildlife Service, which manages Pollardstown Fen, plans to carry out a new survey of the fen in 2019, according to spokesman Maurice Eakin.

It’s sometimes difficult for people to realise the importance of geological features for human habitation. This aquifer supplies clean water to people living in its hinterland; water from Pollardstown Fen has flowed into the Grand Canal since its construction in 1784.

There are historical references to mills fed with water from the fen. In the 1960s, drainage schemes to convert part of it to agricultural land threatened its existence. In the 1980s, the National Parks and Wildlife Service bought part of the fen so that it could be allowed to regenerate and now own about 60 per cent of the fen.

Pollardstown Fen is perhaps most famous for the variety of rare plant and insect species there. On my visit in the summer, Scott pointed out rare orchids, dragonflies and damselflies. He also showed me plants including meadowsweet, marsh valerian and various willow shrubs.

The area around Thorpe’s Well, the modified spring at the pedestrian entrance to the fen is one spot to look for the Marsh Helleborine orchid, narrow-leafed fly orchid and purple flowering marsh orchids with information boards providing useful visual clues to discovering these tiny flowers. The largest stand of saw-sedge grasses in Ireland intermingles with common reeds which are Ireland’s tallest native grass and a habitat for rare moths.

A pair of mute swans also lives here although I didn’t see them on my visits. Brook lamprey, a fish that resembles a small eel, otters and frogs are in abundance in this marshy terrain. The area is also a breeding habitat for the aptly named small bird species, sedge warblers and reed buntings.

The beauty of visiting places such as these at different times of the year is that you can hone your observation skills and sharpen your interest for different seasonal discoveries.

If you do take the time to visit in the summer months, keep your eyes peeled for peacock butterflies, hawker dragonflies and marsh fritillary butterflies – which remains Ireland’s only protected butterfly.

What exactly is a fen?

A fen is a wetland with a permanently high water level at or just below the surface. It gets its nutrients from surface or ground water. Dr Catherine O’Connell, chief executive of the Irish Peatland Conservation Council (IPCC) says that fens are a much forgotten peatland type that exist in several parts of Ireland.

“They are usually associated with rivers and lakes so the river Shannon Callows is a fen modified through farming, the Suck River Callows in Roscommon/Galway is another. There are many fens between the drumlins of Co Monaghan, and around every lake, a fen is part of the mosaic of habitats,” she explains.

Dr O’Connell says that to ensure fens are protected, a national inventory of fens is required in Ireland. “For example, Pollardstown Fen is the only peatland protected in Co Kildare.”

See also the IPCC’s guide to fens and ramsar.org