‘Hidden city’ travel: the discount trick that airlines don’t want you to know about 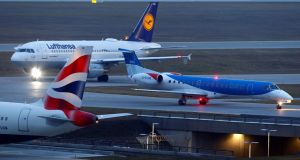 Airlines are cracking down on a ticketing loophole that can knock thousands of euro off the cost of travel – but the fight back is only giving more publicity to the advantages of “hidden city” travel.

At its most simplistic, hidden city ticketing is when a passenger purchases a ticket to less popular and thus cheaper destination that happens to be routed through a more popular, and thus pricier hub destination, and gets off there, skipping the last leg of their journey. Anyone can do it, providing you travel only with carry-on luggage.

It’s a dodge people have done for years but thanks to renewed publicity – and websites that take the leg work out of finding the best fares – airlines have called in their lawyers.

Proof of the industry’s new willingness to act against the long-established practice came in an Berlin court last week where Lufthansa is redoubling its efforts to sue a European business class traveller who used a hidden city ticket to save thousands on a transatlantic flight.

According to a court document, an unnamed male passenger booked a return flight from Oslo to Seattle, which had a layover in Frankfurt. He skipped the final, Frankfurt to Oslo return flight, flying to Berlin on a separate ticket.

The switch, which sounds innocuous enough, cost Lufthansa around €2,112 (about £1,864 or $2,385), the amount the airline is now seeking to reclaim from the customer. Whether the scheme was illegal or not is up for debate. Lufthansa’s case – was thrown out of a Berlin court in December and is now under appeal. But the airline’s action reveals the industry’s determination to close the loophole.

Once a practice offered by knowing travel agents, it’s since been now automated through sites like Skiplagged – to the evident annoyance of airlines who claim they are in effect being deprived both of revenue from travel to the passenger’s intended destination and the ability to sell the seat that’s been skipped.

If previous attempts to challenge “hidden city ticketing” in the US are anything to go by, the German carrier may find the benefit of identifying and pursuing passengers who fail to complete their journeys under the terms of their ticket hardly worth the costs.

According to airline industry analyst Robert Mann, the issue of hidden city ticketing has always been out there but it was only when websites including the US-based Skiplagged began to commercialise the system that the industry took notice.

“Airlines pricing is arcane to say the least, especially when pricing can vary by a factor of 10 for almost the same product, but if a customer chooses to use the ticket or a portion of it that’s inconsistent with the terms of sale, it becomes an issue. If the practice becomes common knowledge, and attempts to use it increase, it goes from being a tiny hole in a big bucket to a huge hole spilling out revenue.”

In 2015 the booking firm Orbitz and carriers in the US sued Skiplagged, which at the time was claiming one million visitors a month, citing founder Aktarer Zaman for “unfair competition” and “deceptive behavior”, and alleging that the site promoted “strictly prohibited” travel. The case against Zaman was ultimately thrown out over issues of jurisdiction.

Mr Mann believes the Lufthansa’s decision to take action may be one of scale. Gaming the system within the US may cost airlines a few hundred dollars, based on the company’s ability to re-sell the seat that wasn’t used, but with international fares running into the thousands, the stakes for the airlines are significantly raised.

“This is a highly competitive industry so when it comes to international ticketing the numbers become big enough not to ignore very quickly,” Mann says.

The practice of hidden city ticketing also holds dangers for passengers. An airline may not notice that a ticket holder has not shown up for a part of flight, but if the practice is repeated or obvious, customers may find themselves stranded in the wrong city, find that the return portion of their trip has been voided, or that they’ve been removed from loyalty programs.

In some instances, passengers have found themselves met at the gate by airline attorneys and challenged with a demand for additional fees. The law is as yet unclear on these cases.

“It’s a calculated risk,” said Mr Mann, “but the numbers are big enough to make it a felony in some cases.”

As Lufthansa’s decision to appeal the case makes clear, airlines are now willing to put those dueling positions to test again, this time in a Berlin court. – Guardian