Walk for the Weekend: Be enveloped by the queen of the Glens’ splendour 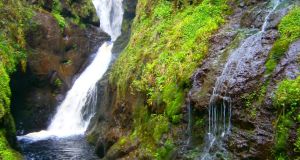 My offering this week comes from the lobby of the Londonderry Arms Hotel, where I have laid claim to the most comfortable armchair.

Despite its un-PC moniker, this is one of my favourite hostelries in the North. Constructed in 1847 and once owned by Winston Churchill, it nestles comfortably within the compelling little village of Carnlough.

Astride Antrim’s world-famous coastal road, it exudes an “olde worlde” charm, perfect for winding down after a day among the renowned Antrim Glens.

Invariably, I find something curiously timeless about doing this; so, it was with a light heart I headed out on a crisp autumnal morning. Immediately, enveloped by the splendour of Glenariff, the queen of the Glens, I ambled upstream and then by footbridge across the River Inver.

Soothed by the cheerful accompaniment of hurrying water while traversing broad leaved woodlands, I found myself surrounded by a Van Gogh like palate of autumn colours.

Abandoning the Inver, the path ascended steeply on a switchback track before decanting me to a spectacular highpoint, from where dreamy views cantered across the North Channel to Scotland’s Mull of Kintyre.

Here, it was an easy saunter downhill, while enjoying distracting vistas across the sweeping Antrim plateau to the ancient Sea of Moyle.

Immediately this fired evocative memories: of schooldays long ago and eye-widening tales about the Children of Lir who spent 300 years here, having been transformed into swans by – you guessed it – a wicked stepmother.

Reaching open moorland, a bridge conveyed me above the headwaters of the Inver to where mining took place in prehistoric times. This idea was disinterred during the 19th century, to create a short-lived mining boom. Iron ore was carried to the coast on a specially built railway that was also used by tourists.

Soon, I encountered my first waterfalls. These were, I mused, rather disappointing and didn’t match the advance hype in terms of either height or volume. Footing it downwards with the Inver to my right, I was brought to a standstill by a cinematic landscape that did match the hype.

Below, was the great unfolding of escarpments that moved the writer Thackeray to dub the area “Little Switzerland”.

Back in the glen, the well-appointed tearooms proved irresistible and I stopped by for a coffee before continuing downhill to the Glenariff River. Amid a startling intensity of colour, the pleasant realisation now dawned that I had kept the best wine till last: an awe-inspiring river gorge accessed by a specially constructed wooden walkway.

Understanding now why visitors are universally enchanted by Glenariff’s copious cascades, I passed a couple of unforgettably clamorous waterfalls before reaching the pack leader: the great double dip of the Ess-na-Larach or Mare’s Tail Falls, which recent rainfall had turned into a thundering tumult.

Below the falls, I crossed the Glenariff by a footbridge and continued downstream on the wooden walkway passing more cascades including the only slightly less spectacular, Ess na Crub Waterfall.

Obligingly, the walkway deposited me at Laura Lodge carpark and the immediate promise of delicious fare just down the road in the Londonderry Arms. Over this repast, I concluded, Glenariff’s manifold charms should decree a visit, at least once, in every Irish lifetime.

Start: From the Ballymena Bypass, Co Antrim take the scenic A43 Waterfoot road. Beyond Glenariff Forest Park (after 12 miles) take the next road right for Laura Lodge
Time: 3 hours
Ascent: 250m
Suitability: Combining the Waterfalls and Scenic trails, this is a moderate outing suitable for those with average fitness
Map: Unnecessary, as the route is fully waymarked