Discovering the wonders of the river Dodder 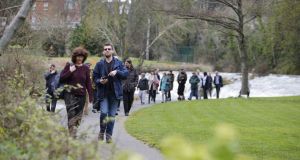 Walkers along the banks of the river Dodder in Dublin. Photograph: Nick Bradshaw

Environmentalists talk a lot about engaging local communities. But it’s refreshing when you find that the community is engaging the environmentalists. Especially if it’s to remind us of challenges overcome by communities on their own initiative in the past, when the term “environmentalist” had hardly been invented.

However, it didn’t initially look as if there was going to be much engagement at all at a World Water Day event I attended earlier this spring. There were banners up announcing the publication of a Streamscapes catchment management manual, tailored to the Dodder river, and of a Wilder Wander app that promises to spur children – and adults – to get out and walk the river bank and discover its built and natural heritage.

But there were less than a handful of individuals in the room when I arrived at the Dropping Well pub in Dartry, south Dublin, bang on time. I was wondering if it was worth staying, but five minutes later the room abruptly filled up. Who knew that so many people would follow the siren call of an Irish Times photographer, who had arrived early, to stand by the river?

The event opened with presentations of splendid prints of a local kingfisher by local photographer, John Stanton, to recognise people who had contributed to protecting the Dodder. First up was Christopher Moriarty, author of the fine river history, Down by the Dodder (and of a book on the Liffey recently featured on these pages).

Moriarty insisted that the real protectors were the community groups “who carry out the necessary actions to clean up the river, month after month”. But he also reminded us that the Dodder we enjoy today owes a debt to the vision of Sir Patrick Abercrombie, who proposed that Dublin’s rivers should be bounded by linear parks in 1914. Moriarty also recalled that the river itself had been very seriously polluted by paper mills and other industries in the century that followed, and that only the Wildlife Act of 1976 provided citizens with the legal instruments to prevent businesses (and sometimes the council) using the Dodder as an open drain.

This point was immediately and eloquently developed by Redmond O’Hanlon, secretary of the Dodder Anglers. Neither he nor his organisation were on the official agenda for the event, but he spontaneously contributed a passionate and detailed account of the work his members have done since the group was founded 60 years ago. The organisers, including the Environmental Protection Agency, Dublin City Council and the Local Authorities Water Programme, had the good grace to yield the floor to him and it was well worth it.

“When we started out,” he said, “fish were falling dead in the river again and again, the fish kills were horrendous. So we traced every pollution point, but this was the bad old days when ‘green’ was a dirty word, the [Dublin] Corporation was not interested”. The anglers learned, he said, that the only way to get businesses to stop polluting was “to embarrass them with the press”.

He gave full credit to community groups such as Dodder Action for their regular clean-ups of rubbish from the river and its margins in more recent years. But he argued convincingly that, were it not for the early activism of the anglers, the rich fauna and flora has returned to the Dodder valley today might still be largely absent.

The natural (and built) heritage of the Dodder was the subject of the Streamscapes manual, an very accessible and practical aid to understanding “the inextricable link between people and their rivers”, as director Mark Boyden put it. Every school, home and business in the catchment could benefit from it.

While Streamscapes programmes encourage people to put away their phones and get into the water, the Wilder Wander app shows that smartphones have their uses in guiding us, and perhaps especially younger people, to engage with our surroundings in remarkable detail. Vicki O’Donnell is the founder and managing director of this young company, and she led a group of Dodder veterans, and a few novices such as this reporter, out on the walk she has mapped between the Dropping Well/Milltown and Clonskeagh Bridge.

It was a curious experience. The app is rich in information, and would have you stop every few dozen metres in order to look at something you may never have noticed before, and learn quite a lot about it. I don’t think many of us knew, for example, that a late 19th-century survey found four species of pseudoscorpions along the Dodder, and that these malign-sounding creatures perform beneficial functions in consuming household pests such as dust mites and book lice.

Nor did we know that the bore holes in the magnificent arches of Milltown viaduct were drilled during the second World War, so that the bridge could be dynamited to deter invading troops. Much less that the holy hour (which used to close pubs on Sunday afternoons) was dreamt up by Kevin O’Higgins, then minister for justice, when he observed unseemly Sunday drunks congregated outside the Dropping Well, as his train crossed this very viaduct in the 1920s.

There is a wealth of much more familiar information also, about the Dodder’s natural communities of fish, birds, mammals, and plants. And there is lots more about historical buildings and river engineering, complete with videos and soundtracks. It is all presented in a friendly format, though tweaks may still be needed, both to some images, and to the site locator for some phone models.

It was notable, though, that most of us fairly soon put away our phones, preferring to talk to our neighbours, many of whom were already very knowledgeable about the river. Accelerating technologies may change this, but a contemporary app could not tell you that two pairs of dippers are nesting adjacently, right here and right now, in the hidden space under a particular millrace. I’d use the app again, but only sparingly if I was in company.

For nothing on a phone can substitute the pleasure of listening live to others’ vivid memories of long-ago childhoods spent along this watercourse. You may not be able to step into the same river twice, yet you can revisit its banks, again and again, all your life.

Time for a Dublin rivers trust?

The launches at the Dropping Well mark another small stage in the process envisaged by the EU’s Water Framework Directive, which aims to improve the quality of our water, and our waterways, through heightened community awareness of the inter-connectedness of all aspects of life in our river catchments.

The Local Authority Waters Programme is tasked to nudge this process along, but its outgoing Dublin community officer, Sinéad Hurson, stresses that the “relentless enthusiasm and dedication” of volunteer citizens groups is the real motor of change.

The Dodder is exceptionally well served by such associations, with Dodder Action, Tallaght Community Association, and Knocklyon Network all contributing time and expertise to protecting and restoring the river along their local stretches. Other stakeholders, such as Dodder Anglers, have also made very significant contributions.

Keith Scanlon, secretary of Dodder Action, is now facilitating discussions on the formation of a river trust for the Dodder, or possibly for all of Dublin’s rivers. The river trust model has been very successful in mobilising communities (and funds) in the UK, and has been spreading into the Republic in recent years.

He says there is still quite a way to go, but good progress is being made. There are many stakeholders along a river, from businesses to householders to diverse leisure groups, as the ongoing debate about the Dodder Greenway has shown.

More will be achieved if they engage in constructive conversations with each other. One gap Scanlon wants to fill is representation by uplands farmers, in Wicklow and Dublin counties, where the river begins its journey to the Liffey. This recalls a wise line from a Chinese emperor 3,600 years ago, quoted in the Dodder Streamscapes manual: “To protect your rivers, protect your mountains.”