Another Burren, beneath the waves 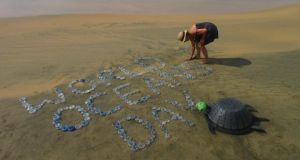 What do you think of when you think of the Burren? The odds are that you think of dramatically hump-backed ridges and terraces of bare limestone. And maybe of the miracle that such an apparently barren landscape is so fertile, in its uniquely diverse combination of alpine and Mediterranean wild flowers.

But there are other Burrens to explore and enjoy. The perennially innovative Burrenbeo Learning Landscape Symposium introduced its participants to two of them over a weekend earlier this month, leading us into Burren woodlands, a topic we will come back to shortly on these pages, and also out to a Burren that is, for much of each day, beneath the waves.

The Burrenbeo Trust places great value on marrying people with place. Its Learning Landscapes workshops, many of them in the field, offer opportunities for engagement with nature, guided by people with special relationships to Burren locations.

The aim is to improve the skills of teachers, and volunteers, who work to reconnect young people and communities with the outdoor world. There is also a strand involving artists.

Sabine Springer is certainly intimately linked to her local landscape, and also is a living bridge between the natural sciences and the arts. She came here from Germany in 1990 as a “woofer” (short for “world wide opportunities on organic farms”), and then trained in NUIG in zoology, botany and geology.

She also became an accomplished engraver and is also an irrepressible sculptor in a wide range of media. These include whatever she happens to find on the Burren shoreline, right beside her spectacularly located home on the edge of the Doorus peninsula, near Kinvara.

You might say her house turns its back on the Burren. It looks instead out across Galway Bay to the Twelve Bens, which repeatedly vanish and reappear while we talk, under squalls of Atlantic rain. As a monitor for the Irish Whale and Dolphin Group, Springer’s eyes are often on the sea. But she also keeps a close focus on the rocky beach, not 200m from her window, and this is, indeed, another Burren.

The group is partly modelled on the highly successful Burren Programme

Springer has also found a new outlet for her passion for conservation, one that also underlines the continuity of the region from sky to sea. She has joined the recently formed CuanBeo, a community-based organisation aiming to improve “quality of life, environment, economy and heritage” around Galway Bay.

The group is partly modelled on the highly successful Burren Programme, which has engaged hundreds of farmers in the restoration of their iconic landscape. It would be wonderful if CuanBeo could achieve something similar with the Burren’s seascape.

Springer is a lively 60-something with intense blue eyes, bundle of restless energy, intellectual curiosity and imagination. While talking constantly her eyes wander off again and again out to the Burren’s oceanic and intertidal zones. She is “wonderfully happy here”, recording faithfully both the rich variety of the Burren’s marine life and the forces that threaten to extinguish it.

A kaleidoscope of collections, which spill all over her home in a kind of ordered chaos, bear witness to the wondrous hidden worlds exposed by the tides. It’s certainly as diverse, probably more so, than the cornucopia of plant species to be found inland.

She has a dozen boxes of fossils, meticulously sorted according to species. Beside them, a glass case contains intricately beautiful coralline algae, entire and intact. These underwater seaweeds are usually found only as smashed fragments on the tideline.

Springer has collected these examples out on Carrickadda, the limestone spit off the nearby Flaggy Shore, to which Gordon D’Arcy dedicates a fascinating chapter in The Breathing Burren. The spit is fully exposed only twice a year, by equinoctial tides. This offers a rare opportunity to find coralline algae without having to snorkel.

And sometimes that doubt proves well founded. The biggest one turns out to be made of papier mâché. Springer has playfully entwined her artwork with smaller examples of the real thing.

You will find an exposed dateline from a page of The Irish Times, the only material  Springer will use for this artwork

The line between art and nature is blurred in this room: raise your eyes to the ceiling, past the jam jars full of birds’ feathers, and you find the rafters populated by remarkably life-like rooks, choughs and even a jay.

(Look under the beak of a rook, however, and you will find an exposed dateline from a page of The Irish Times, the only material that Springer will use for this kind of artwork. Naturally. Yesterday’s paper, it turns out, does have more uses than wrapping today’s fish and chips.)

Common shapes occurring in the bodies of radically different creatures fascinate the artist in Springer. She shows me what looks like an entire and solid tail-fin bone (if such a thing existed) for a medium-sized fish. It turns out to be the cartilage that articulates a whale’s tongue. Then she pulls out a similarly formed but very small piece of gelatinous membrane. It fits perfectly over the end of a cuttlebone.

Her eye for striking outlines and matching forms also finds expression in her artistic transformation of another of her collections – the endless stream of plastic artefacts swept on to her shoreline.

Ophelia’s Rings is an attractively organised display of ring-like objects washed up by the eponymous storm. She also laid out 60m of pieces of vivid blue plastic sheeting found on the shore. She photographed it via drone in various configurations, sometimes combined with plastic mock-ups of Johnny Mór the Turtle, a prime plastic victim in real life. They make disturbing, beautiful images. So do the animal toys – seals, dogs, sea horses – she has artfully wrapped in patches of fishing net, all found on the same beach.

One of these pieces of netting had actually held a trapped gannet, which survived for two days. But she did not make art out of that find, or not directly. “You can reach people with beauty,” she says. “But not with horrible things.”

Sabine Springer’s recording methods follow two distinct but related paths. One is the scientific collection of data, noting the numbers of species she sees each year; and when, where and how often they occur. And she also often counts the numbers and kinds of plastics and other industrial detritus that she finds on the shore.

“Why collect data?” she asks, and answers herself: “In the beginning you don’t know, but you are trying to find a story. Perhaps in 20 years of data, you find out what the story is.”

But she is also compelled to find others ways of telling nature’s stories, as an artist. “This work has become very important, in that it fills the aesthetic and emotional gap I feel is created by the modern scientific approach to nature,” she says.

“I recognise that visual art is a different and older form of knowledge. My aim is to make us more conscious of this knowledge and nature again.”

Sometimes her art finds uncanny overlaps between natural forms and the design of the objects that are destroying so much of the natural world. A study of the bottoms of plastic bottles which plague marine life might easily be mistaken, at a casual glance, for a group of jellyfish.

And sometimes, her art reaches people who can make a difference. The veteran leader of Coastwatch, Karin Dubsky, invited her to participate in an exhibition in the European parliament last May, hosted by Sinn Féin MEP Lynn Boylan. Last December, the European Union banned some single-use plastics. Not quite cause and effect, but certainly a ripple effect.