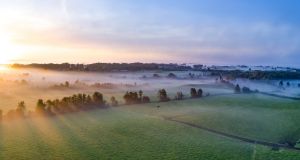 The sun rises to dispel the fog in rural Tipperary. “Our ancestors woke up to birdsong and light,” says Niall Hatch of Birdwatch Ireland.

RTÉ broadcaster, Derek Mooney describes the dawn chorus as one of the most magical experiences in nature.

For over 20 years, he has been broadcasting live birdsong in the early hours of the first Sunday in May and sharing knowledge and experiences of bird enthusiasts with listeners from Ireland and around the world.

“It’s perfect radio. We stand in the middle of a woodland and record all the birds we hear. You can’t see the birds so if we had cameras, we couldn’t show you the birds there but it’s a great listening experience,” says Mooney who will record from midnight until 7am on Sunday, May 5th from Cuskinny Marsh near Cobh, Co Cork.

The 2019 Derek Mooney Dawn Chorus programme will begin with sounds of the nocturnal corncrake in Donegal and then will travel across the world as the sun rises from Australia to India, Serbia, Lithuania, Finland, Scotland, Wales and Ireland.

Listeners can send in audio clips of the birds they hear and ask experts to identify them. The programme, which won a Rose D’Or international award for the best radio event of the year in 2016, is available on the European Broadcasting Unit satellite free of charge, because there are no copyright restrictions on birdsong.

But, of course rather than listening to birdsong on the radio, you could go outside just before dawn and listen for yourself. Niall Hatch of Birdwatch Ireland advises people to go out just before the first light so that they are ready to hear the early birds.

“You’d need to go out around 4am on the east coast and about 4.40am on the west coast. Choose somewhere safe in a woodland or a park, not near a river as it will be still dark when you arrive and wear layers of clothes so you can remove some as it gets warmer,” says Hatch. It’s also advisable to wear waterproof footwear because the grass will be dewy and to bring a torch for safety. Go with friends rather than on your own.

Birds sing all year round but they are particularly loud in May in the Northern Hemisphere because it is bird nesting season, and the birds are protecting their territory.

“It’s the peak of the bird nesting season and male birds are at their most territorial and most aggressive. It’s the male birds who do the singing in most species, except the robin, where both male and females sing,” says Hatch.

And, there is an order to the singing, starting with the birds that have larger eyes. These birds can identify the first signs of light earlier than birds with smaller eyes.

“So, you’ll hear blackbirds, song thrushes and robins first, each with their different song. Then, about 20-30 minutes later, you’ll hear wrens and then at about 5am [on the east coast], you’ll hear chaffinches, great tits, greenfinches and wood pigeons,” explains Hatch.

“Some birds’ song is easier to identify than others. For example, I find the wood pigeon’s cucuu-cu-cucuu the easiest to recognise. And, then you must remember that some birds will be singing from high up in the branches of trees while others will be down low in hedgerows.

“It’s a very three-dimensional experience which of course doesn’t translate onto the radio so well,” says Hatch. There are many YouTube recordings available now for beginners to tune in their ears to the different birdsong.

Hearing birdsong early in the morning does of course depend on the weather. “If it’s heavily raining, it’s harder to hear them and they will end sooner because they have to go forage for food and find shelter. But, the biggest enemy of birdsong is the wind,” explains Hatch.

Hatch believes that we, as human beings, have evolved to listen to birdsong as a backdrop to our lives.

“There is a sense of completeness when you listen. The birds start to sing in response to the rising sun and it’s humbling to hear these sounds of the earth as it’s spins on its axis,” he says.

“Our ancestors woke up to birdsong and light. People who come along to the Birdwatch Ireland Dawn Chorus events say to us that while they didn’t want to get out of bed, they are always glad they did. They go home from the events very energised,” says Hatch.

Mooney says that lots of people tell him listening to early morning birdsong connects them with nature.

“They’ll tell me that they took it for granted for years but listening to it made them realize how nice it really is,” he says.

Hatch says that those who do get up and out early to hear the dawn chorus shouldn’t try too hard to identify the different bird song.

“Let the wave of sound wash over you and enjoy,” he advises.