Path of a Waterford saint hopes to become the 'Irish Camino' 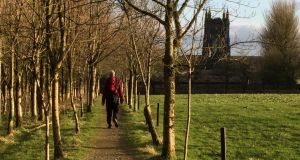 The final section of St Declan’s Way on the pilgrim’s journey to Mt Melleray Abbey.

Who was the first Christian missionary to Ireland? St Patrick? Unlikely, for it is almost inconceivable that our national apostle arrived to an island that had not previously been exposed to the Gospel.

Having been Christianised for a century in Patrick’s time, the Roman Empire had strong trade links with Ireland from both Britain and the European mainland. It is, therefore, highly unlikely that awareness of the new faith did not seep across the sea and that the powerful religion juggernaut that had swept the Roman Empire like a prairie fire did not attract some early Irish adherents.

According to tradition, one of the first pre-patrician adherents to Irish Christianity was St Declan of Ardmore. Born into a royal family of the Deise Mumhan that ruled southeast Munster, Declan was initially taught about Christ by a holy man named Dioma. Afterwards, he travelled to Rome on a personal journey of enlightenment. Consecrated a bishop, he returned and preached the gospel in his native Waterford at a time that, many historians believe, was prior to St Patrick’s return to Ireland in AD 432.

Nevertheless, the accepted narrative from the period diminishes Declan’s role. In a series of hagiologies, Patrick was instead proclaimed as sole evangeliser of the Irish.

To emphasise this dominance, he is portrayed as confirming Declan as Bishop of the Déise after the Ardmore saint journeyed to an evangelical meeting at Cashel. Obliged afterwards to play second fiddle to Ireland’s national apostle, Declan, nevertheless, remained supreme in his south Munster heartland with Patrick, wisely perhaps, eschewing the Déise on his Irish mission.

Regarded by many as holding the strongest claim to being Ireland’s first missionary saint, Declan is almost unknown outside Co Waterford. The murky world of medieval church politics probably has much to with this by allowing the deeply venerated saint of the Déise, fade from public consciousness when the northern Irish church became supreme.

History was then adroitly written to robustly proclaim Patrick, the first Bishop of Armagh, above Declan as national apostle to the Irish people. This greatly strengthened Armagh’s claim to evangelical primacy over all of Ireland.

A robust popularity in the deep south, however, meant the practice of pilgrimage to Ardmore developed during the medieval period as Declan became the much-venerated saint of Co Waterford. The pilgrim path tracks the route that Declan took when going to Cashel to meet Saint Patrick in the fifth century, but in the opposite direction. According to tradition, pilgrims followed the ancient Rian Bó Phádraig route over the Knockmealdown Mountains before continuing along the Bóthar na Naomh (Saints Road) to Ardmore.

This tradition was given additional credence in the 19th century when historians identified that many vestiges of the ancient route from Cashel to Ardmore were still existent in both counties Waterford and Tipperary.

St Declan’s feast day is still celebrated enthusiastically with a week-long pattern each July, but the practice of a pilgrim walk to Ardmore lapsed in the 20th century. Overgrown and virtually forgotten, the medieval trail remained dormant but is now being revitalised.

In 2016, the volunteer Declan’s Way Committee was awarded €150,000 under the Rural Recreation Fund for upgrade works. The process of de-vegetating the path and adding the necessary trail furniture has now reached an advanced stage with the route scheduled to re-open later this year.

Conor Ryan is chairman of the St Declan’s Way Committee. He believes that with the number of pilgrims completing the Spanish Camino de Santiago rising to more than 300,000, the time is opportune to revitalise St Declan’s trail and thereby attract additional spirituality-based visitors. Confident that this new pilgrim route will be an outstanding success, he firmly believes it will “appeal to walking enthusiasts because of its length and exceptional variety”.

There is something of interest around almost every corner

“It is Ireland’s longest dedicated pilgrim route and I expect it to attract visitors from the Irish diaspora who have family ties to the towns and villages along the route. This year’s opening is part of a strategy to turn St Declan’s Way into a major attraction bringing increased tourism spending to west Waterford and south Tipperary,” says Ryan.

“For the committee, the strength of interest among walkers has been a big motivating factor to get the route waymarked so that it can be used by walkers in the 21st century.”

Kevin O’Donnell, an accommodation provider and farmer from Ardfinnan, Co Tipperary, first conceived the idea for revitalising St Declan’s Way when he walked the Camino. He has now spent eight years working to make his dream a reality and is a passionate advocate for the project.

When I spoke to him, he was awaiting the arrival of a group of pilgrim walkers to his farmhouse B&B, who were intent on completing the new route.

“There were many ups and downs along the way, but I am now delighted that we persisted and that the idea is finally coming to fruition. There is something of interest around almost every corner,” says O’Donnell. “St Declan’s way will link Ardmore, Cappoquin, Lismore, Mount Melleray and then go over the Knockmealdown Mountains to Ladysabbey, Cahir Castle and the Rock of Cashel.”

He envisages the route becoming an “Irish Camino” and transforming local communities in the way the successful Waterford Greenway has already done.

“I see it as a six day walk with a manageable 20km day including the unforgettable experience of an overnight stop at Mount Melleray Abbey. The route is in every way comparable to the Camino and offers the six consecutive days of pilgrim walking which has become so popular on the road to Santiago.

“Already local businesses near the route are gearing up for the expected influx of pilgrim walkers. I am confident the project will transform the areas surrounding the route in the way the Camino had transformed northwestern Spain.”

To mark the re-opening, Knockmealdown Active is organising a guided walk of the entire route, starting on Saturday, April 27th. This will offer a historic opportunity to walk the full length of the restored trail.

For the convenience of participants, the walk will not be over consecutive days but in five stages on the last Saturday of April, May, June, July and August.

More information from 086-3541700 or by visiting stdeclansway.ie