Walk for the Weekend: Cliffs of Annacuna near Ben Bulben 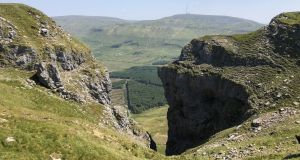 I came to walk Ben Bulben out of Luke’s Bridge but changed tack high up in the southwest corner of Glendarragh. Instead of turning right out onto the broad plateau that culminates in the summit and “prow” of iconic Ben Bulben, I took a left and walked east-northeast to the edge of the Gleniff Horseshoe and the dramatic Cliffs of Annacuna.

It was a lovely varied walk of high, dry moorland, easy going, great Atlantic and inland views, and very interesting geological features; and it may well be the only walk in the area that has no access problems!

The day was already hot and sunny as I progressed up to the indistinct track or path, marked Gowlaun in Sheet 16, that runs under and parallel to the steep grassy north flank of the Ben Bulben plateau. A tiny stream cuts into the ravine in the southwest corner of the glen, nearly the only evidence of flowing water in this porous limestone landscape.

Near the top of the ravine, I broke off the Ben Bulben path and onto the broad ridge with unnamed tops of 566m and 597m (Sheet 16). This is a lovely stretch of peat hags, some exposed karst, bog cotton and deep, sometimes round depressions attesting to the slow solution of the limestone beneath where I walked. Soon the TV transmitter mast of Truskmore appeared over the horizon and I allowed it guide me to the edge of the Gleniff Horseshoe and the wonderfully dramatic Cliffs of Annacuna.

These limestone cliffs are probably the highest inland cliffs in Ireland. Glacial in origin, they tower over the southwest corner of Gleniff from where they are probably best and most safely viewed. Inaccessible caves and openings are visible high up on the cliff face, including the highest cave in Ireland, Diarmuid and Grainne’s Cave, so named as legend tells that it was the final resting place of this tragic couple in the days of Finn MacCumhail and the Fianna!

I progressed carefully along the cliff edge, around deep ravines and indentations, until I reached the highest point on the ridge out to Ben Whiskin. At this point I was directly over the cave and the ruined National Schoolhouse in the Glen below it. Great crater-like depressions pockmarked the summit area and its western slope, probably attesting to collapses into the high upper galleries of Diarmuid and Grainne’s Cave, or some other as yet unexplored cave systems.

My route from there was down a sometimes steep grassy slope towards the “prow” of Ben Bulben, which route I knew would avoid some rock buttresses on the east side of the Glendarragh. Even so I added a few degrees to the right or north to be on the safe side. Soon I was connecting up with well-paved peat extraction tracks and walked back to the car with the dramatic north “corner” of Ben Bulben relieving any tedium of track walking.