Heading for Vancouver, aka Hollywood North? Here’s our guide to the city 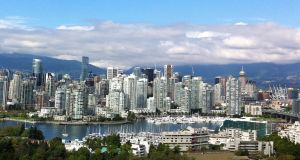 Famous originally for forestry, mining, and the fur industry, now, due to its spectacular scenery, Vancouver’s biggest industries are tourism and film

“The East Van area was once one of the most down-at-heel parts of the city so I got this place for a song,” says Benita Beckman in her packed-to-the-rafters emporium of rugs and ethnic clothes on Vancouver’s Commercial Drive. Beckman has owned “Beckwoman’s” since the 1970s and, as she nurses a broken ankle, a result of an accident during a bout of recent snowfall, she tells me of her fight for women’s rights in decades gone by, and of the marches that took her to Ottawa along with thousands of other Vancouverites. She says that the moniker of her shop is itself a means to address what she considers to be a gender bias in her own name.

A font of knowledge about the East Van district, and about Vancouver generally, Beckman has seen the city change radically over the past decade, since the rise of investment from China, but in particular since hosting the Winter Olympics and Paralympics in 2010, making it one of the most expensive places on earth in which to live. Along with the rest of the city, the pretty detached houses on the residential streets that branch off Commercial Drive are way beyond the price range of most young or first-time buyers, and the rents on the stores in this once decrepit area are now at an all-time high.

Vancouver is Canada’s most westerly metropolis, located in the lower mainland region of British Columbia. Formerly called Gastown, it was named after George Vancouver, a British explorer who arrived in the area in the late 18th century. Famous originally for forestry, mining, and the fur industry, now, due to its spectacular scenery, the city’s biggest industries are tourism and film. In fact, so many films have been made in Vancouver in recent years it is now referred to as Hollywood North. While I was there I saw a plethora of movie catering trucks parked on the city’s main streets.

My own visit was primarily due to a production of my play Belfast Girls – which was on in the Cultch Theatre (in East Van) after a run in White Rock, a beautiful city suburb. I found Vancouver to be visually stunning, framed as it is by the snow-capped North Shore Mountains on one side and the Pacific Ocean on the other. The greater Vancouver area has a population of about 2.5 million while Vancouver itself is one of the most densely populated cities in the world – along with San Francisco, New York and Mexico City – and is the most densely populated in Canada. But with its long, wide streets and constant view of the mountains it doesn’t feel that crowded.

While undoubtedly expensive, the city also appears frequently in lists of the best places on earth in which to live – and it’s easy to see why. The air is fresh (as a result of the Pacific and immense forestry in and around the city) and the city is culturally rich and various – being also one of the most ethnically diverse capitals in the world.

One of the qualities that sets it apart from its West Coast neighbours south of the border (the US) is, to my mind, the sense of respect from state and people towards its First Nation heritage – and this can be detected all over Vancouver. For instance, on the University of British Columbia campus is the Arthur Erickson designed-Museum of Anthropology, home to one of the world’s finest exhibits of Northwest Coast First Nations art and crafts. YVR International airport itself welcomes you not with dazzling glass or sharp design but with spectacular totem poles, and artworks by Coast Salish artist, Susan Point.

Where Vancouver is similar to its west coast neighbours (in the US) is in its slacker vibe; it oozes a cool, relaxed, and dare I say, post-hipster quality; but it is also in Canada, so this comes hitched to a strong sense of social and environmental responsibility (unlike the US, Canada has free healthcare, an enviable level of arts and science funding and a standard of living its neighbours must surely be in awe of – especially in light of recent US cuts). For instance, this year the Vancouver Aquarium Marine Science Centre is the first zoo/aquarium in Canada to discontinue sales of single-use plastic water bottles on site. I suspect this will soon (hopefully) be a policy rolled out worldwide.

There is something for everyone in Vancouver: Yaletown with its juice bars and eyebrow parlours (it has a hipster vibe but seems very moneyed, too); Kitsilano, to the south, which Lonely Planet describes as “a former Hippy haven’’ – the city’s Haight-Ashbury – has many waterfront shops and cafes; the South Main area (SoMa) and Commercial Drive with its numerous Thai cafes, vintage clothes stores, ethnic food emporiums. (Commercial Drive is probably my favourite street in Vancouver: it recalls a pre-gentrification Portobello Road in west London.) Then there’s the 1,000-plus-acre Stanley Park, a natural, non-designed mass of dense forestry (surrounded by the stunning yacht-filled English Bay and Vancouver Harbour), within which you can spend a day admiring its sylvan majesty or follow one of its many marked trails or take part in a scheduled event. With its web of neon signs the area of Richmond is like a mini Hong Kong, and is one of the biggest Chinatowns I’ve ever seen. (Again, there is that sense of a city where the “other” is welcome, and where the edge of the western world happily meets the East.) For high-end shopping there’s Robson Street – but there are also many markets and vintage stores to be found throughout the city; I chanced upon a large vintage store opposite the 7-Eleven in Yaletown. Also worth visiting is Vancouver Art Gallery in Downtown (750 Hornby Street) – which is permanent home to the work of one of Canada’s most famous modernist painters, Emily Carr – who was inspired by First Nation heritage and culture.

Vancouver has no shortage of quality restaurants, of all cuisines and price ranges. Some favourites of mine include Wallflower Restaurant (Vegetarian, 2420 Main Street); Heirloom Restaurant (Vegan, 1509 W 12th Avenue, South Granville district) – its avocado fries are to die for; The Wooden Spoon Company (Russell Avenue, White Rock) for breakfast and brunch. As mentioned, Commercial Drive is full of Thai and Asian restaurants (and the obligatory burger joints), and has some fine bakeries, too. Some cafes of note on this long road – which is worth spending at least a day exploring – are Bump N Grind (916 Commercial Drive) and Moja Coffee (1102 Commercial Drive).

The city also has a thriving theatre and dance scene – with numerous international companies visiting year-round and many homegrown companies such as the Arts Club Theatre Company. Founded in 1958, the Arts Club is the largest theatre company in Western Canada, and is where such luminaries as Michael J Fox began their careers. From June to September there is the renowned Bard on the Beach Shakespeare Festival. Also, in October the city hosts the Vancouver Writers Festival, which in years gone by has programmed the likes of Martin Amis, Margaret Atwood, Alice Munro, JK Rowling, Salman Rushdie, Sarah Waters and Frank McCourt.

Vancouver has a grid system so it’s easy to get around by car, while public transport networks, Translink and Sky Train, are also simple to navigate; a day pass is very reasonable at under C$10. Sky Train also happens to be a great way to see the centre of the city without the traffic. The outer environs are full of leafy and expensive suburbs, and beyond these, towards the coast, are miles of beautiful boglands where the now protected bald-headed eagle flies in proliferation; here in the outer limits the eagles’ wide nests can be seen all over the tops of trees and on electricity pylons. It’s a real pleasure for visitors not used to seeing eagles outside zoos or aviaries to see these majestic birds – especially when flying on a clear day against the backdrop of the North Shore Mountains.

It should also be said that Vancouver has a serious drug problem – caused of late by the popularity of the synthetic drug fentanyl, used primarily as an ingredient with which to cut heroin. Much more concentrated than heroin, it has caused numerous deaths and the area around the intersection of Hastings and Main Street is full of people openly suffering the effects of this and other substances. With paramedics apparently rushed off their feet, the city has a tough row to hoe in alleviating the problem.

For those interested in spending time in the North Shore Mountains, there are all sorts of trails and sporting activities such as biking, hiking, kayaking, golfing, skiing, snowboarding etc. And, as there is pretty much constant snow on the mountains - hence the choice of Vancouver for the 2010 Olympic and Paralympics Winter Games – some of the region’s ski resorts (such as Whistler) rank among the best in the world. There is also a winemaking district in the Cowichan Valley on Vancouver Island - another fascinating landmass (bigger than Ireland) off the coast of Vancouver. There are numerous ferries to the island. And if you fancy a quick visit to the US, Seattle is a few hours drive across the border (there are regular bus and train trips, too, some of which leave directly from YVR Airport).

Jaki McCarrick travelled to Vancouver as a guest of Air France