Flybe collapse: What can you do about your cancelled flights?

Airline ceases flights to and from Dublin, Cork, Belfast, Knock with immediate effect

Passengers and staff have been left stranded at Exeter airport after British regional airline Flybe collapsed after a plunge in travel demand. Video: Reuters 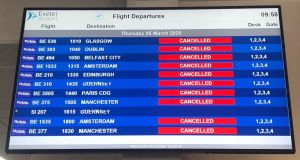 News that British airline Flybe has gone into administration has been a cause of dismay for thousands of passengers who had booked to fly with the regional airline, which also operated services to and from Dublin, Cork, Belfast and Ireland West in Knock.

The airline’s fate was sealed following the collapse of last-ditch talks on a bailout from the UK government, combined with pressure from the coronavirus outbreak.

“As a result of insolvency proceedings, Flybe has ceased to trade and is no longer able to fly or accept bookings,” administrator EY said in a statement on Thursday. “Unfortunately, it has been necessary to make the majority of the workforce redundant.”

The airline had three direct routes operating twice daily to Dublin, three to Ireland West Airport Knock amounting to about 15 flights a week, one to Cork and 14 to Belfast City Airport.

In the very short term, the UK’s Department for Transport has stationed staff at affected UK airports to assist passengers who have been stranded by the airline’s collapse. It said the majority of Flybe routes continued to be served by alternate options and that bus and train operators had been asked to accept Flybe tickets while other airlines had been asked to offer so-called rescue fares at a reduced rate.

For many Irish people due to fly home in the days ahead, the news is bad – and there are no two ways about it. “Please do not travel to the airport unless you have booked alternative flights,” a spokesman for the Commission for Aviation Regulation said on Thursday morning.

Effectively, that means people will have little or no option but to check available flights with other airlines. It is possible that some airlines may offer flights at reduced rates – known as “rescue fares” in the trade – in light of the circumstances, and while passengers may as well ask for such fares, it is more likely they will have to buy tickets at full price to get home.

People in Ireland who have flights booked in the weeks ahead may be able to make a claim under their travel insurance policy if they have travel insurance. But not all policies will cover the collapse of an airline. Failure cover is usually known as scheduled airline failure insurance, and insurance providers should be contacted for further details.

The possibilities that passengers will be compensated by the airline itself are remote to non-existent.

While passengers have a legal right to claim compensation under European regulations on air passenger rights, once an airline goes out of business, all claims are filed with administrator or liquidators. The bad news is passengers will be unsecured creditors and will have to wait until all secured creditors are taken care of first.

There is another route people can take, however. People who have booked a flight with the airline will most likely have used a credit or debit card. If goods or services have been paid for using a credit or debit card and are not delivered, then consumers should immediately contact their bank and get it to start a process known as a chargeback.

A chargeback means people notify their credit card provider to refund money paid directly to Flybe directly back on to their card. Time limits do apply, and consumers typically have 120 days from the time they become aware of the problem to apply for a refund.

The chargeback process can take a long time, depending on the bank, the credit card provider and the reason for the chargeback. Given that this situation is so high profile and affects so many people, there should not be much toing and froing between customers and their banks.

Brianna Parkins: My other half is trying to get me excited about spending a summer in Ireland
3

The patriotic cellist who refused to play Rule, Britannia!
5

Covid-19: The fallout for families has been immeasurable
6

Run, don’t walk, to nab the best makeup collection of the summer
10

Can a physically demanding job be bad for your brain?
Real news has value SUBSCRIBE