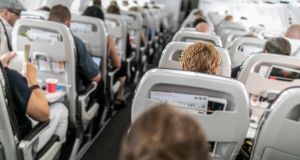 In-flight etiquette: ‘We encourage our customers to be respectful of each other,’ says American Airlines. Photograph: iStock/Getty

Put away the blue and black dress – or was it white and gold? And leave behind Yanny or Laurel. Here’s the latest debate to grip the internet: Should you recline in your airplane seat?

It all started after a woman posted a video on Twitter showing her with her seat reclined. A man seated behind her rhythmically pushes the back of her seat at least a dozen times, the 45-second clip shows. The video shows that the man’s tray table was down, with his phone resting on it.

“He was angry that I reclined my seat and punched it about 9 times – HARD, at which point I began videoing him, and he resigned to this behavior,” the woman, Wendi Williams, wrote on Twitter.

Williams said the pushing continued throughout the roughly 80-minute American Airlines flight from New Orleans to Charlotte, North Carolina, on January 31st. The man in the video has not been publicly identified.

She said a flight attendant scolded her, told her to delete the video and gave her a passenger disturbance notice. “He was basically given permission to continue, and there was nothing I could do about it,” Williams said later.

In a statement, American Airlines said it was “aware of a customer dispute” that happened on the flight. “We encourage our customers to be respectful of each other,” said an airline spokesman. Republic Airways, which operated the flight, said it was also looking into what happened.

@BravoAndy Here’s a great jackhole! He was angry that I reclined my seat and punched it about 9 times - HARD, at which point I began videoing him, and he resigned to this behavior. The other jackhole is the @AmericanAir flight attendant who reprimanded me and offered him rum! pic.twitter.com/dHeUysrKTu

In one of her tweets, Williams wrote that she was upset with a flight attendant who, she said, reprimanded her and offered the man behind her a complimentary cocktail. Williams said she did not intend to set off a furious debate with her video.

“My issue is more, I got assaulted on a plane and the person behind me got rewarded with a free drink,” she said.

Online, reactions to the video were divided: You’re either a recliner or you’re not. However, proper airplane etiquette is more complicated than that, Henry Harteveldt, a travel industry analyst, said. Seat reclining follows an unwritten rule: Don’t do it unless you really need to.

“Airplane etiquette is you only recline when necessary, and if you must recline, just put the seat back a little bit to get the comfort you need without encroaching too much on the person behind you,” he said.

Still, Harteveldt said, the passenger behind Williams was wrong to keep striking her seat. “The person in the seat has the right to recline; that’s the way it is,” he said. “It may not be fair, but life itself is not fair.”

Harteveldt, citing increasingly claustrophobic cabins, added that “emotions run higher and hotter on airplanes” as they are more crowded and “legroom and personal space has been reduced.”

In 2018 the US Federal Aviation Administration declined to regulate the size of seats on airplanes, despite consumer complaints about comfort and questions about safety.

In an interview on US TV, Delta Air Lines’ chief executive, Ed Bastian, appeared to agree with the unwritten rule of the skies. “The proper thing to do is, if you’re going to recline into somebody, you ask if it’s okay first,” he said.

Michael Boyd, an aviation analyst, said that, “in any case, it is the airline that determines the amount of space a seat takes up, not the passengers themselves”.

“Disputes regarding seat recline have been going on for decades,” Boyd said. “This isn’t a new phenomenon. There isn’t a lot of room, we know.”

Williams remained steadfast. “I will recline,” she wrote in a text. “It’s the airline’s job to fix the problem, not mine!” – New York Times