There are counties named after Antrim, Clare, Roscommon and Robert Emmet 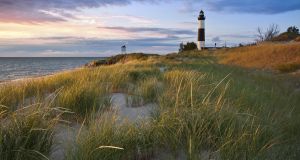 Lake Michigan: In summer, the weather is usually glorious, so it’s all about the outdoors – there’s lots of water sports from paddleboarding and surfing to boating and water-skiing. Photograph: iStock

The Horton Bay General Store is a two-storey clapboard-framed building on a quiet country road between Boyne City and Charlevoix, in northern Michigan’s Lower Peninsula. It opened its doors in June 1876, around the same time George Armstrong Custer made his last stand at the Little Bighorn.

It still operates as a general store under the ownership of Chip Lorenger, a lanky 70-something Michigander with a long grey ponytail. Save for the addition of electricity, contemporary wares and, on the high-fronted porch, a Coca-Cola fridge from the 1940s, the store hasn’t changed all that much from when the young Ernest Hemingway would hang out here during his childhood summers at the turn of the 20th century.

We land into a small airport that looks like a hunting lodge. The weather is still warm, and hunting season has begun

Inside, the long wooden counter is lined with stools and framed by worn tin signs advertising Vernor’s Ginger Ale (“deliciously different”) and Hires Root Beer. The main floor is a jumble of display cases and cabinets full of all kinds of wonderful ephemera, from old roller skates and porcelain dolls to T-shirts and sweatshirts bearing the store’s name.

I’m not much of a Hemingway buff, but I drive the 100-odd kilometres up from Traverse City just to visit the store and the Red Fox Inn next door. This is where, according to my guidebook, Hemingway’s fishing buddy Vollie Fox lived, though it’s only open “very erratically”. On the car stereo I play Simon & Garfunkel’s America:

Everything about the Lower Peninsula represents the kind of America I’d always heard about – mostly from vote-hungry politicians tapping into a lowest denominator-kind of patriotic nostalgia – but never recognised in the big cities of the coasts or in those rural states that take a dim view of cosmopolitanism and modernity.

Here, the myth of rugged individualism that is at the core of the American psyche is made real, in the vast spaces of this forested wilderness, which from the sky looks like an endless carpet of conifers and maples speckled in autumn red.

I fly into Traverse City, the largest city in the northern half of the Lower Peninsula, in late September. It’s a 35-minute flight from Chicago aboard a brand-new United plane that offers free wifi and the kind of friendly service midwesterners take for granted. “My good friend Wendy and I are committed to taking care of you,” says super-chipper flight attendant Michael, “because service is our passion and safety our priority”.

As we approached, I could see the beaches and dunes along the western shoreline of Lake Michigan, a 480km stretch that is one of the midwest’s most beautiful holiday destinations, home to orchards and wineries and dotted with handsome, inn-filled towns populated by the same kind of friendly, open people as Michael and Wendy.

We land into a small airport that looks like a hunting lodge. The weather is still warm, and hunting season has begun. In my hotel, I overhear a conversation between two hunters about the day’s successes. “A couple of woodcocks,” says one, to approving nods of the other. I can’t help myself but to ask what he’s going to do with the birds.

“Eat them, for sure.” A pause, and then, sensing exactly what this stranger with the funny accent was really asking him, he adds, “we eat everything we hunt up here. Anyone who hunts just for the kill is an a**hole”.

The weather is usually glorious, so it’s all about the outdoors

John (the opinionated hunter) and Drew are curious about my being from Ireland and are happy to chat. We talk about hunting (the most sustainable way to get meat for food, I’m assured); politics (Michigan is traditionally a bellwether state, oscillating between Republican and Democrats depending on candidates and policies; they both agree Trump is an embarrassment); gun control (they feel strongly about protecting the 2nd Amendment but don’t think anyone needs to own a semi-automatic AR-15); and Michigan’s strong Irish connections.

They would both like to visit Ireland one day. “I hear the pubs in Galway are great,” says Drew. I reassure him there are great pubs pretty much all over Ireland.

Everywhere I drive I see Irish connections. There are counties named after Antrim, Clare, Roscommon, Wexford and Robert Emmet. I drive on Dublin Road and visit the Irish Boat Shop in Charlevoix. In the middle of Lake Michigan, a two-hour ferry ride from Charlevoix, is Beaver Island, known as “America’s Emerald Isle”, as most of its 600 inhabitants are descended from Irish fishermen who settled here in the 1850s.

There are a bunch of Irish bars in Traverse City, but this is a town full of microbreweries (the Workshop Brewing Company is a highlight) and exceptional restaurants serving high-quality cuisine to discerning visitors from Chicago, Detroit and beyond.

The bulk of these are collected in a five-block stretch along Front Street, where fusion cuisine and modern American dishes are prepared using ingredients sourced from the surrounding region: this town was pushing farm-to-fork long before it became a California trend.

Most menus also feature cherries, for Traverse City is America’s cherry capital. In the surrounding orchards grow three-quarters of the country’s tart cherries, on nearly four million trees; more than 500,000 visitors show up at the beginning of July for the National Cherry Festival, where there’s music, pies, parades and the crowning of a National Cherry Queen.

All about the outdoors

The festival is the summer’s biggest crowd-puller, but there is no shortage of visitors between May and September, many of whom own or rent holiday homes stretched out along the shoreline. The weather is usually glorious, so it’s all about the outdoors – there’s lots of water sports from paddleboarding and surfing to boating and water-skiing; hiking is massively popular (including on the massive lakefront dunes); and the paved trails and forest backroads are perfect for cycling.

I do none of these. Instead I play golf, on a handful of very different courses: Lochenheath, a handsome inland links-style course on a 300-acre cherry orchard hugging Grand Traverse Bay; the Robert Trent-Jones-designed Heather course at Boyne Highlands, near Petoskey; and the mammoth Bear course on the edge of Traverse City, designed by Jack Nicklaus and rated as one of the toughest courses in the country.

In between rounds, I visit some of the lakeshore towns north of Traverse City. In Leland, one of three villages huddled around the tip of the Leelanau Peninsula, I enjoy a fabulous whitefish lunch at the Cove, a large shack overlooking a small weir that is a popular salmon run.

In Petoskey, I visit the City Park Grill, where Hemingway was a regular, and the nearby history museum that holds a couple of autographed first editions by the author. Charlevoix is a busy port town with 30 or so “mushroom houses”, designed by local architect Earl Young in the 1920s and whose boulder facades and rounded tops make them look like hobbit houses.

It’s all so classically American. And wonderfully strange.

Back in the Horton Bay General Store, I share my observations with Chip and tell him that I couldn’t get Simon & Garfunkel out of my mind.

“Oh, it’s America, alright,” he says. “But it sure gets damn cold in winter, which is why I wanna move to Florida. How would you like to buy the store?”