There is something about the Burren that draws me again and again: there's always something new to explore 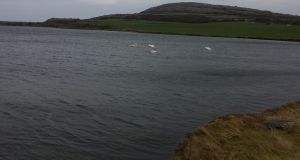 The Flaggy Shore on the north coast of Co Clare

There is something about the Burren that draws me again and again, for no matter how often I come there are invariably new attractions to explore. Today I am heading for the north coast of Clare and a tiny peninsula that I have, inexplicably, never visited.

One who came was Seamus Heaney, who extolled others to follow in his poem Postscript: “And some time make the time to drive out west/ Into County Clare, along the Flaggy Shore/ In September or October, when the wind/ And the light are working off each other...”

When I arrive to do the poet’s bidding it is not autumn but winter, and the wind and light aren’t working off each other. A sea mist sits heavy over the Flaggy Shore, which could, at that moment, be more accurately described as the foggy shore.

Fear not, I have a plan B for such an eventuality: a retreat to the nearby Hazel Mountain Chocolate Factory, where I while away fog time by imbibing of deliciously warm drinking chocolate with mince pies.

Indulgence brings reward. As I belatedly set off on my ramble, the mist retreats and a sliver of golden sunshine lights the ocean. Now I can observe the extraordinary landscape that was born in the bed of a warm ocean over 300 million years ago when Ireland was located near the equator.

This teemed with life and gradually the shell, bone and plant remains were deposited along with sediments on the seabed. Over millions of years these hardened into limestone pavements, which moved north as the great landmasses disintegrated. The evidence proving this titanic journey is now eloquently written by fossils embedded within the rocks that litter the shoreline to my right.

I pass a sign for Mount Vernon House, the summer home of renowned playwright and folklorist Lady Augusta Gregory. Her literary friends Shaw and Yeats came here, and unsurprisingly perhaps found between sea and sky a wellspring of inspiration for some of their finest works.

It was Heaney, however, who famously observed a slate grey lake “lit/ By the earthed light of flock of swans”.

Sure enough, the fresh waters of Lough Murree soon come into view with an obliging bevy of the purist white swans, nonchalantly nourishing from grey tinted waters.

Onwards, then, by the lakeshore to reach a junction where I take the left option towards Finavarra Point. Here a stout Martello tower was constructed as a defensive edifice at a time when widespread paranoia existed that a small man with a very large hat was about to invade Ireland. Yet Napoleon’s army never did make it to Clare, with the result that, now bereft of purpose, the tower is locked into a vacant stare towards the handsome hills of the north Burren.

Retracing my steps from Finavarra leads me past the farm where the famous Linnalla artisan ice cream is produced. Continuing straight ahead at a junction, I then enjoy superb views of the Burren’s finest hills.

Back at my starting point in New Quay, the open fire in Linnanes pub beckons irresistibly. Powerless to resist, I dive within and enjoy thick seafood chowder followed by steaming coffee.

Relaxed, I then watch through the great windows as the languid evening sun goes down on Galway Bay.

Start point: The harbour beside Linnanes pub, Newquay, Co Clare, which lies due north on the N67 between Lisdoonvarna and Kinvarra.