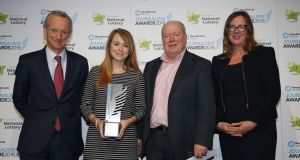 When I heard I had been named on the Forbes 30 Under 30 list for Europe, I was drinking coffee on a dusty porch in northern Uganda.

A commander from a South Sudanese rebel force, who’s currently on sick leave, was washing her clothes nearby. She was explaining how she drank too much rum on Christmas Day and fell over dancing, knocking out her front teeth.

The rum had come from Europe, she said, looking at me accusingly. I hastily assured her I had nothing to do with it.

That was when I checked my phone and saw the Forbes list had been announced. I was included in the section for “talents shaping the European media and marketing industry”. As a freelance journalist who spends a lot of time reporting on horrific stories it feels like the world is ignoring, this kind of recognition means a lot.

My generation gets a bad rap, but most of the millennials I know are grafters – and that applies doubly to young journalists

No one I was with in Uganda had actually heard of Forbes. I tried to explain the significance of it to a friend – a former child soldier and an incredibly patient man, who’s getting ready to write his own book. He looked disinterested.

Then we went back to complaining about the high cost of school fees and the lack of scholarships for Ugandan children – even those who study hard and get perfect grades.

Becoming a journalist at a time when the industry is under unprecedented pressure has obviously been a challenge.

I grew up idolising writers and photographers dedicated to holding the powerful to account, who documented facts when others were trying to hide them and reported from some of the world’s most tumultuous places.

Starting out in journalism now involves a bit more juggling. When I began, six years ago, I worked as a cocktail waitress and Christmas elf while freelancing.

After moving to London to do a series of internships in early 2014, I slept on futons and floors, wrote to hostels asking for a bed in exchange for labour, and ended up catsitting for the lovely editor of the Financial Times, because of the impossible cost of rent.

Eventually, I landed a coveted staff job. For nearly two years I worked as a reporter at digital “millennial”-focused outlet Vice News, covering everything from the Litvinenko inquiry to evictions in the Calais “Jungle” migrant camp and massacres in Pakistan and Kenya.

This lasted until most of my department were unceremoniously laid off at the end of a workday, without any solid explanation. It was a scene that’s becoming common in the media industry.

We had tried to unionise shortly before, but were rejected by management with an email signed “fanks”. I was only a few weeks back from a war zone.

My generation gets a bad rap, but most of the millennials I know are grafters – and that applies doubly to young journalists. One friend secretly slept under her office desk at night while working a temporary contract on minimum wage.

Another writes her novel at evenings and weekends, while waiting to find out if she’ll be made redundant from her full-time editing job. Low pay and zero-hours contracts are the norm, and sometimes it can be difficult to see any way out of that.

In one sense, lists like Forbes’s 30 Under 30 are arbitrary: so many other people from my generation would have been qualified for inclusion

Social media can increase anxiety, but it’s also been an equaliser.

Today, you can broadcast your own work when no one else will, and get it in front of people you’d never normally encounter.

The level of support offered on social media means that when I’m at my most isolated – locked in a compound during suicide bombings in northeast Nigeria, or investigating state-sponsored torture in regime-held Syria – I can reach out and dozens may respond.

It also means others can reach out to me. For the past six months I’ve been in daily contact with migrants in Libyan detention centres, who found my contact details online.

Men, women and children have been locked up indefinitely and subjected to horrific abuse, as a result of EU policy aimed at stopping arrivals to Europe. They update me on developments in real time. Hidden smartphones are their lifeline.

Once you’re linked in, there’s no turning away anymore.

Yet a lack of security, in terms of good pay and fair employment contracts, means it’s more onerous than ever to keep reporting.

Coming of age at a time when the economy was a mess and jobs were scarce was actually a blessing in disguise. Like for so many of my classmates, it forced me to look abroad, where I found a much broader range of opportunities than were available in Ireland.

Many friends who left with me have now returned home, and they tell me about the housing crisis and how expensive everything is. Like them, I’m conscious I may never be a homeowner. We might even be forced to move between countries again, as we’re priced out of each new place.

I’m grateful for the family and friends who have bolstered me, and the colleagues who have graciously offered experience and advice. I’ve received guidance on everything from managing personal stress and trauma to making sure you’re not being exploited as rates for journalism plummet. I’ve also tried to make sure I pass some of that knowledge on again.

I’m sure many of them also have direct experience of emigration and financial worries, while they all certainly understand grafting.

In one sense, lists like Forbes’s 30 Under 30 are arbitrary: so many other people from my generation would have been qualified for inclusion. In another sense, they’re meaningless (at least, they are where I was in Uganda).

But this sort of recognition also offers a boost: a reminder to carry on when things get tough again, as they undoubtedly will, and see what else we can achieve.

Sally Hayden (29) is a freelance journalist who writes regularly for The Irish Times. She won the Newsbrands Ireland best foreign journalism award in 2018

Recycling, reusing and reimagining waste into new clothing and accessories
7

How do you get bereaved fathers to talk? Bring a football
8

I’m Irish and I live abroad. Why have we been forgotten in Election 2020?
9

Yotam Ottolenghi: How to turn yesterday’s bread into a feast
10