Max Abrahamson obituary: One of the most remarkable lawyers of his generation

He wrote what became known as ‘the engineers’ bible’, which has been in print since 1965 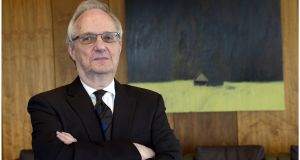 Max Abrahamson, who died in October, was one of the most remarkable lawyers of his generation working both in Ireland and internationally. Author of a leading textbook on engineering law, he consulted on construction projects in more than 60 countries and appeared as an advocate in arbitrations and higher courts in 25 countries. A thinker as well as a practical problem-solver, in recent years he told every lawyer who would listen that the legal professions had become too adversarial and, without reform, faced a diminished future.

Born in Dublin, Max and his identical twin brother, David, were the youngest of five children of Prof Leonard Abrahamson and Tillie Nurock, whose families left Russia and Eastern Europe in the early 20th century. Leonard Abrahamson (1896 -1961) had himself a remarkable career, gaining distinctions in Irish, Hebrew, French and German in Trinity College Dublin and then as a physician. He was president of the Royal College of Physicians in Ireland from 1949 to 1952. The family home was in Fitzwilliam Square, Dublin.

Following his education at Sandford Park school in Dublin, Max Abrahamson attended Trinity College Dublin from 1949, where he was elected a Trinity Scholar. He qualified as a solicitor in 1955. Although only 53 solicitors qualified in that year, there was very little work in the chronically depressed Irish economy. Abrahamson set up practice in an office in his home and wrote a postcard to everyone he knew telling them of his new venture. To supplement his meagre earnings, he lectured practicing engineers in contract law in Trinity College. This work and other lecturing inspired his specialism, which led to his international reputation as a construction lawyer.

A fluent writer, Abrahamson wrote Engineering Law and the ICE [Institution of Civil Engineers] Contract which became known as “the engineers’ bible” throughout the world. It was first published in 1965, and its fourth edition was published in 2003. A Japanese edition was published in 1988. The book brought to life the often arid features of engineering contracts which are used in complex building works. It also explained relevant contract and tort law by using memorable examples. He subsequently developed the “Abrahamson principles” (first published in 1973), which give a theoretical basis to the allocation of risk in construction contracts. These principles have become a widely used philosophy, receiving recognition in Hong Kong and Australia.

Abrahamson’s legal practice rapidly expanded at home and abroad and he trained and inspired two generations of Irish construction lawyers. From 1973, he practiced in Dublin in association with the commercial law firm McCann FitzGerald, with whom he merged his practice in 1991. Abrahamson continued as a consultant with that firm until 2014. He was also a consultant to Baker & McKenzie, the international law firm. In addition to his work nearer home, such as the Jack Lynch tunnel, the West Link toll bridge, the International Financial Services Centre, the first Luas project in Dublin, the Heathrow rail tunnel and Eurodisney, he advised on projects in China, Singapore, Hong Kong, Bahrain, Botswana, Lesotho and Pakistan among other places.

An advocate of alternatives to litigation, he deprecated the cost and haphazardness of the adversarial system. He urged that the distinction between barrister and solicitor be eliminated or narrowed, as in Australia, as he thought it made no sense that the lawyer usually most familiar with the case largely hands it over to another lawyer as a dispute looms. He regretted, though, that solicitors themselves had become excessively adversarial, often fighting over unimportant points in transactions. A computer buff, he warned for many years that lawyers need to use computers more for efficient work, or else face losing work to others who will adapt.

Alongside law, Abrahamson loved classical music and, in particular, piano and opera. Jewish intellectual and artistic culture interested him greatly, but he was never a religious man and had very little time for ritual of any kind. He sculpted in clay, and had bronze works exhibited in the RHA. He also carved wood in his office, as therapy during long working days. His masterpiece as a wood carver was an interpretation of Jacques-Louis David’s Napoleon Crossing the Alps.

Max and his wife Edna separated late in life after almost 60 years of marriage, four children – one of whom is the film director Lenny Abrahamson – and six grandchildren. It was obvious to all who knew them that Edna’s support and care were instrumental in Max’s success. Although in his later years he warned people about his “anecdotage”, he remained an amusing, kindly raconteur with a great sense of humour.

Max Abrahamson is survived by his four children, Gail, Lynne, Leonard and Emily, his brother David and six grandchildren. He was predeceased by his older siblings, Mervyn, Beth and Maurice.

Ross O’Carroll-Kelly: ‘Sold to the man in the Ireland jersey with a bowtie tied around his neck!’
5

Paul Flynn: A family favourite pasta dish and a trick for perfect ravioli
9

What sold for about €500k in Ballsbridge, Dalkey, Sallynoggin and Lismore
10