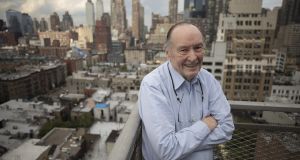 James R McManus, the last of the long-reigning leaders of a Tammany Hall Democratic dynasty that presided over Manhattan’s politically tempestuous West Side since 1892, died at his home in the heart of it, Hell’s Kitchen. He was 84.

The McManus family’s dominion was inaugurated by James’s great-uncle Thomas R McManus, who was universally known as “The McManus,” to distinguish him as undisputed leader of the clan. In 1905, he deposed the West Side district leader George Washington Plunkitt, the quotable courthouse philosopher who unabashedly professed, “I seen my opportunities and I took ’em”.

Like his father, grandfather and great-uncle, Jim McManus was an elected district leader, a relatively minor functionary in the great scheme of political office but a major neighbourhood figure in the days when the clubhouses were cogs of well-greased machine politics, when a well-connected local party boss could find a loyal constituent a job, an apartment or a key to getting out of jail.

But by the time McManus inherited the Hell’s Kitchen district leadership in 1963 and became the family patriarch, the Democratic organisation had become just a vestige of the feral Tammany tiger that had fended off New York’s would-be reformers and good-government groups since the mid-19th century.

McManus, one of New York City’s last surviving recognisable neighbourhood political bosses, never denied the reality that the power district leaders once held was long gone. “In the old days, you could get people jobs, take care of their problems, help with their daily life,” he told The New York Times in 2017. “But you just can’t help anybody anymore. You can’t even take care of a jury notice.”

In a midtown neighbourhood (also called Clinton) west of the Theatre District, where younger white collar workers were supplanting Irish dockworkers, McManus proved himself remarkably durable. He also remained nimble, partly by reaching accommodation, if sometimes grudgingly, with real or potential rivals when faced with defeat.

Unlike most fellow district leaders, McManus sustained a robust, full-service neighbourhood clubhouse (and a funeral home) in the West 40s. (The phone there would also ring in his apartment six blocks away.) His factotums routinely delivered for constituents desperate for an apartment, employment, bail or help in preparing their taxes or vacating a summons, or perhaps concerned about crime encroaching from Times Square.

While some party reformers were defending the civil liberties of prostitutes during the crime-plagued mid-1970s, McManus was espousing a different point of view. “The trouble is that some of these reform politicians think they have a right to vote their conscience,” he said. “In this neighbourhood, we think that when you’re elected, you have to vote the way the people want you to vote.”

James Robert McManus was born in Manhattan on September 10th, 1934, to Eugene and Helen (Kerney) McManus. His father was a deputy chief court clerk. Jim grew up near 10th Avenue in the same house his great-uncle Thomas occupied until his death in 1926.

After graduating from Iona College in New Rochelle, McManus worked in the Times’ production department and, like his father, as a part-time funeral director. In 1965 he was named an assistant administrator for the city’s board of elections, which he described as a part-time rather than a no-show job.

McManus never married. His sister Maureen McManus was married to Michael J Spillane, a bookmaker, loan shark and, by all accounts, gentleman gangster who was known as Mickey. He was killed in 1977, and his gang was succeeded by a more brutal one, the Westies. Organised crime was always an occupational hazard of politics in Hell’s Kitchen.

“We didn’t interfere with the mob on the docks, and they didn’t interfere with our politics,” McManus explained in 1992. “Once, they brought an old man into the club who needed a place to live. I said, ‘What was your profession?’ He said: ‘Pickpocket, but I can’t work anymore because my eyes are going. But I never robbed a working guy in my life.’ I got the guy an apartment.”

Like Plunkitt, who originated the apothegm “honest graft”, McManus distinguished favouritism from corruption. “I wouldn’t do anything for money that I wouldn’t do for nothing,” he said. “What I mean is, a little old lady comes in and wants a favour. I do it. A big law firm wants a favour. I say, buy 50 tickets for my cocktail party. They’re not bribing me. They’re just supporting me.”

James was a regular, or organisation, Democrat, but he understood the nobility of compromise, particularly when he was outnumbered.

In 1972, he bucked the party establishment to support liberal senator George S McGovern in New York’s Democratic presidential primary. Some club members were discombobulated, but young, reform-minded McGovern campaign workers were even more taken aback when they gravitated to McManus’s old-school clubhouse to volunteer.

By 2014, when his sister Maureen died, he had become the last of his generation of the clan. “My mother asked me when she was dying to make sure I look after Maureen,” Jim McManus said. “My work is done.”