Billy the Belfast kick-boxer and the tin hut of dreams

Billy Murray set up Peace Fighters with one aim: to transform the lives of young people 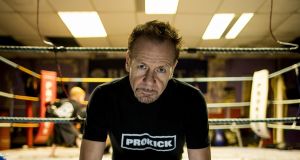 It’s a rainy Thursday night, and the street outside Billy Murray’s famous kick-boxing gym in East Belfast is dark and deserted.

But as soon as I walk in the door, I’m hit by a sudden, startling blast of energy, heat and sweat. A class is in full swing, dozens of adults of all shapes and sizes sparring with each other. They are dancing from foot to foot, then lunging in to pummel their opponents, boxing gloves smacking hard on to pads.

I can’t see Murray through the blur of kicks and punches, but I can hear him. “Bring in the knees,” he’s calling. “Don’t bring in the knee heavy, bring the knee in soft!”

Then Murray spots me standing at the door and begins weaving his way towards me. Whatever idea I had of how a four-times world kick-boxing champion would look or sound, Murray isn’t it.

In the 1980s nobody wanted to come to Belfast

This gentle, quietly spoken 59-year-old is utterly without swagger. Yet there is an unmistakable dignity and authority in the way he carries himself. He has only to speak a word, and the whole place falls silent to listen. To adults and children alike, he’s known as Mr Murray. Everyone bows to him as they enter class, no matter what age they are.

“You have to be strict but not overbearing,” says Murray. “If they don’t enjoy it, they won’t want to do it.”

Murray established the ProKick gym on Wilgar Street in 1980, right in the thick of the Troubles. He wanted to share his own expertise and passion for kick-boxing, as well as his deeply-held belief in the transformative power of the sport, its ability to motivate people, and bring them together.

The motto of the club is painted on the rusty corrugated-iron wall: truth, discipline, respect. For Murray, these aren’t words or gimmicks. They are maxims to live by, his own personal philosophy.

“In the 1980s, nobody wanted to come to Belfast. Every image people saw on TV was of murder, mayhem, destruction. But we have always had every type of religion in here. No football tops. You come in, you do your training, and that’s it.”

In 2008, together with fellow champion kick-boxer Carl Emery, Murray started the Peace Fighters, an initiative aimed at promoting peace and respect through combat sports and martial arts, with a particular focus on helping disadvantaged children.

At the official launch, a boxing ring was set up outside the Unicef headquarters in Switzerland. The assembled diplomats, dignitaries and consul generals saw for themselves how the disciplined thrill of kick-boxing brought commitment and purpose to kids who perhaps had little else going for them in life.

Then Irish president Mary McAleese sent a message of support to the Peace Fighters in Geneva, then later followed it up with an official visit to the ProKick gym in East Belfast. Murray still has the photographs of the visit, a little dog-eared by now, in pride of place on the club noticeboard.

“You get any kid, no matter how troubled or damaged or out of control, get them into a gym, and I guarantee to offer them fresh hopes and perspectives and turn out a very different child,” Murray said at the Peace Fighters launch, and he’s since proved his point many times over.

“Parents can’t understand how we do it, but it changes lives,” he smiles.

Murray’s insights come from painful experience. His own study of martial arts began when he was badly beaten up as a schoolboy.

“After it happened, I was ashamed that I couldn’t defend myself. My father was a hard man, very much an eye for an eye, and I didn’t want to tell him. My mum bought me a book, a beginner’s guide to kung fu. It was very simple, just a set of line drawings really. But the message it contained was profound.”

Although Murray is intensely proud of the 15 world champions that ProKick has produced over the last 27 years – “I don’t think there’s another boxing club in Ireland that could rival us” – he emphasises that only 10 per cent of the club’s 250 members actually fight. For the majority, it’s non-contact only; a way to learn self-defence, lose weight, tackle stress, get fit, be mindful.

And while the sport may have a stereotypically macho reputation, there are plenty of women involved.

Pauline Goody, known affectionately as Granny G, takes a breather for a moment to tell me about her love of kick-boxing.

“I’ve been coming here for 15 years,” she says, wiping the sweat out of her eyes. “I fell into it by accident, but I was hooked immediately. It brings your fitness levels up fantastically, and I believe every woman should learn self-defence.”

Goody’s granddaughter Grace has been training at ProKick since she was six years old. Now she’s 16, and a junior Irish champion kick-boxer.

“That feeling of winning – it’s the best feeling ever,” she laughs. “I used to do Irish dancing, but then the kick-boxing took over completely, and it’s my life now.”

The ProKick fighters may be moving from strength to strength, but the gym itself is in a terribly dilapidated condition.

“The Old Tin Hut”, as they call it, has more than served its time. There are gaping holes in the roof, and the water-stained ceiling tiles are caving in.

With investment from the Urban Villages project, which regenerates areas with a history of deprivation and community tensions, ProKick has secured new premises for the gym, on nearby Bloomfield Avenue – but to buy the building, they must raise the remaining £140,000 themselves.

“It’s going to be hard to leave this place,” says Johnny Smith, who’s yet another of the club’s numerous world champions, as well as the father of Murray’s four-year-old old grandchild – Murray’s daughter Brooke is his partner.

“So many memories. We’re all so attached to the old tin hut.”

Billy Murray, however, has no time for nostalgia. He is adamant that now is the time to go; there’s the next generation to think of, and the one after that.

“A new gym, for the future. I would love that to be my legacy,” he concludes.