Hilary Fannin: We’ve all glared at bulging buttons. We’re good enough as we are 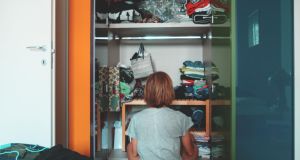 I’ve written in the past about my late mother’s obsession with weight loss. I’ve described how, in her 40s, she would march up and down the seafront with plastic nappy pants over her trousers in the hope of reducing her posterior. I may have told you, too, about long-ago summers when, in an attempt to melt, she would slather cooking oil over herself and lie on sheets of tinfoil on the dry, scrubby grass in our back garden.

A couple of nights after she died we found the diary she had begun that year, her 90th. Her entry for January 1st read: “Lose Weight Now!” She did, in the end. We all will.

The thing is, my mother wasn’t particularly overweight. She was just on a lifelong search for a self she’d lost: a girl of 20, a “slip of a thing”, walking on to the Gaiety stage in costume and opening her tender mouth to sing.

“Maybe,” my new mate Emma Gleeson gently suggested the other day, as she worked her way through my own wardrobe, weeding out my “aspirational” belongings, “your mother was searching for a discontinued self.”

Emma is a professional declutterer. Not a proselytiser or someone who demands that we all live in mellow minimalism, she’s an intuitive and efficient young woman who, having researched the way consumers approach buying clothes (often as disposable items not to be worn more than once or twice), is interested in how cluttered homes and bulging wardrobes can damage self-esteem.

I’d been reliably informed by a friend (I was eating a vegan burger at the time) that Emma’s aim was to free people from their clutter so that they could enjoy the possessions they cared about while, with luck, developing consumption habits that would have less catastrophic effects on the environment.

“Hurfiffic, shend her over,” I said through a mouthful of mung bean, remembering my own New Year’s resolution to try and live more sustainably.

Emma came to my house at ten o’clock one morning, when the smoke alarm was going off, the kitchen was a haze of blue charred fumes, the cat was choking unattractively and I was struggling to recall why I’d agreed to have a total stranger come to my shabby house and chuck out my tat.

I made her coffee, and minutes later I was happily sitting on my bedroom window sill watching my guest, a gently persuasive character, clear out my wardrobe, which included the usual ill-fitting, guilt-inducing online purchases, a couple of pairs of jeans that I could squeeze into in 1979 and some ageing jumpers with cryogenically frozen shoulder pads.

Emma founded her business, Give Up Yer Aul Tings, initially to educate people about their consumption habits. Gradually, though, it became clear that emotions play a big part in clutter, so the business developed, she explained, into a more holistic service. Something as seemingly trivial as clearing out old, unworn or unwanted clothes can, she said, pull up all sorts of questions about how and why we hoard and consume.

I suspect I’m not alone in having stood in changing rooms, unhappily reflected on all sides, glaring at buttons that refuse to close and feeling teary with self-loathing

Emma uses the term “hedonistic treadmill” to describe the joyless process of buying an item of clothing, consciously or unconsciously thinking that those boots or that jacket will ameliorate some sense of loss and fill the void. We buy something in the sales, telling ourselves that technically it could fit (if we didn’t eat for a week), then feel guilty about the money we’ve wasted.

I suspect I’m not alone in having stood in changing rooms, hot and anxious, unhappily reflected on all sides, glaring at buttons that refuse to close and feeling teary with self-loathing. You’re hideous, I told myself recently, having, against my better judgment, succumbed to an afternoon at the January sales. Hideous – it’s a word I learned watching my mother punish her own reflection.

“We need to tell ourselves that we, not some idealised self, are good enough as we are,” Emma said. She left with a bag of clothes for the charity shop. I felt unburdened, truly lighter.

Emma Gleeson will give a talk at the National Library of Ireland in Dublin, at 6.30pm on Tuesday, February 12th, as one of a number of events celebrating the Chinese New Year. Tickets cost €5. See dublinchinesenewyear.com and giveupyeraultings.com

The Irish professor involved in introducing European animals to Australia
9

Living on the edge: endless sea views in Skerries for €950k
Real news has value SUBSCRIBE