Rearing snails in Ireland: ‘We were surrounded by them. They shared our bedroom’

New to the Parish: Eva Milka came to Ireland from Poland in 2005 and ended up starting her own snail farming business 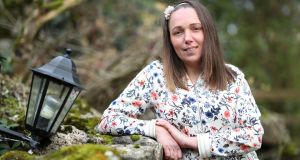 Eva Milka began rearing snails with her partner in their one-bedroom apartment in Kilkenny, after eating them in France.

“We couldn’t eat enough of them. We came back to Ireland, and we couldn’t get escargots. So, we decided to start raising them in plastic containers. We had our bed in the middle of the room, surrounded by plastic containers of snails. They were sharing a bedroom with us.”

At the time, in 2011, commercial snail farming in Ireland was non-existent, but the European market demand was so high, Milka and her partner saw an opportunity: “Snail farming is constantly growing, so we thought, why don’t we give it a go?”

In 2016, the global snail market was worth some $154 million. France is the largest consumer, spending around $48 million on escargots, but the French import 90-95 per cent of what they eat.

Milka came to Ireland in 2005, and is originally from southern Poland. Her parents, she says, who grew up on farms, worked to build a life for her and her brother in the city of Czestochowa.

“They come from a farming background, and they didn’t want us to grow up, live on, and stay on the farm. And look at me now – I’m living in the middle of nowhere, in a completely different country, farming snails.”

Milka first came to Ireland to work in hospitality, and her partner is a third-generation baker from Skerries in Co Dublin. As the first commercial snail farmers in Ireland, they encountered many challenges while establishing their business.

“Initially, we had a huge problem finding a premises. Imagine having a piece of farmland to rent, and a few outbuildings, and me coming to you saying I have a business idea, I want to farm snails. You would think I’d been drinking. People look at you as if you’re from a different planet. But, in the end, we got a beautiful premises in Co Carlow.

“Being the first in Ireland to farm snails was our biggest disadvantage, there was nobody to learn from. We were foolish thinking we could copy and paste existing methods from another European country where they are farmed successfully.”

Milka and her partner tried three different methods – from Poland, Italy and France – but each failed in Ireland’s conditions.

“Ireland is such a unique country, with such a unique climate, and because we wanted to farm snails using a free-range method outdoors… we really had to develop the technique for the Irish farming conditions. So farmers can now learn from our mistakes.”

Milka and her partner farm a “pedigree variety” of snail, which is native to Ireland – the little grey snail: “We didn’t want to introduce anything which is not native.”

The initial research and development phase of their business was difficult, Milka says, and none of the State agencies were able to offer information about snail farming.

For a small creature, which we treat as a pest in Ireland, every single part is being used. That’s why the industry is growing”

“If you’re looking at farming sheep or cattle, you go to Teagasc or the Department of Agriculture, they have all the research done and publications, you could possibly even link up with your neighbour. But for us, there was nobody.”

Milka believes snail farming could be a viable alternative source of income for many farmers in Ireland, given the demand.

“Teagasc is saying that traditional farming isn’t generating much revenue, and that farmers should think about different sources of revenue, and enterprises. But when it comes to doing that . . . there are no supports.

“It’s an exciting industry, it’s growing and we have everything in Ireland that we need to farm snails. An ideal climate – just look at your garden, it’s full of snails – we also have access to land, clean water, good soil, and we are a farming country with a reputation abroad.”

Due to climate change, temperatures are rising in southern Europe, where the demand for snails is much greater. But because of summer heat waves, supplies are dropping to such an extent that some breeds are now considered endangered, and farms are closing in large numbers. In Ireland, however, the warming summers are helping Milka and her farm.

“Global warming is working in our favour. We get warm, wet summers. Snails are nocturnal, they eat at night and eat much better when the nights are warmer, so they grow faster.”

Snail farming is also highly sustainable, Milka says – one acre of land will produce around 10 tonnes of meat, and every part of the creature is used: the meat is eaten; the shells are ground up as fertiliser as they are rich in minerals; the eggs are sold as highly priced caviar; and even the mucus is used, in the cosmetics and pharmaceutical industries.

“For a small creature, which we treat as a pest in Ireland, every single part is being used. That’s why the industry is growing.”

According to Bord Bía, there are now around 30 snail farms in Ireland, with most of them operating from just one acre of land or less.

Now, Milka works with snail farmers in Ireland: “We started training people to farm snails because we cannot produce enough alone to satisfy the demand.”

Milka is about to celebrate 15 years of living in Ireland, which she says “felt like home” as soon as she arrived. Her family in Poland, despite their aim to steer her away from agriculture, are now supportive of her business.

“When I first told my parents I was going into snail farming, they both nearly had a heart attack. But that was the initial stage. With parents, once you’re happy, they’re happy too.”

Milka says she could not see herself living in a big city again. “The quality of life in the countryside is just amazing. There’s something very therapeutic about farming.

“I think everything happens for a reason. Farming must have been in my blood.”