Deeply religious but non-sectarian, he was one of few MPs with a scientific background 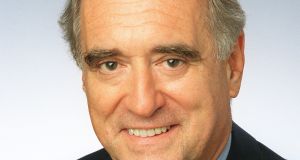 Brian Mawhinney – Lord Mawhinney – was the first Ulsterman to join the British cabinet in 59 years when he became transport secretary in 1994. Like many transport ministers, Mawhinney, who has died aged 79, lasted barely a year in the post.

He inherited rail privatisation and moved Railtrack into the private sector more quickly than planned. He worked to build bridges with the environmental lobby and tried to stimulate a debate on the balance in transport policy between road and rail. He was intellectually demanding of – and sometimes sharp with – officials; his departure was met with some relief in the department.

In July 1995, following his re-election as party leader by Conservative MPs, the beleaguered John Major appointed Mawhinney as party chairman. With less than two years of the parliament to run, his tasks were to restore morale, raise money and prepare the ground for a general election campaign. He was a tough operator – a quality Major thought was required given the dire political position – and was a dogged rather than a persuasive media spokesman for the party. And with the Conservatives divided and Labour under Tony Blair riding high, he had a poor hand. But he was close and loyal to Major; the two men and their wives often dined together.

The 1997 general election campaign was a Tory disaster; the party was bitterly divided over Europe and the result was its worst in modern times. At the end of each campaign day he often brought bad news to Major, whose aides thought, unfairly, that Mawhinney was too eager to share problems with the leader, rather than lifting his spirits.

Mawhinney saw his job as chairman as delivering what Major wanted – rather than be a strong, independent-minded operator doing things his way – and that is why he informed Major of the whole picture. When Major left No 10 for the last time, he had Mawhinney at his side. There remained little for him in politics after Blair brought Labour to power. But in 2003 Mawhinney’s career took a turn when he began a seven-year spell as chairman of the Football League.

For one who had a reputation as a political bruiser, he showed diplomatic skills in the post. He helped to reform the league’s structure, introduced English football’s first “fit-and-proper person” test for club ownership in 2004, and renamed the divisions as the Championship, League One and League Two. Although he tightened financial regulations and raised the issue of the potential for bankruptcy of clubs who spent recklessly, he failed to persuade clubs to agree to a salary cap. He resigned in 2010 at the age of 70.

Born in Belfast, he was the son of Frederick Mawhinney, a restaurateur, and his wife, Coralie (nee Wilkinson), both devout members of the Church of Ireland. Brian attended the Royal Belfast Academical Institution and graduated in physics from Queen’s University in the city, having taken part in an exchange programme with the University of Michigan. He continued his studies at the Royal Free hospital, London, where his work on the effects of radiation on bone growth earned him a PhD. He took a lecturing post in the subject at the University of Iowa in 1968 and two years later returned to the Royal Free as a lecturer.

Mawhinney stood and lost for the Conservatives in the safe Labour seat of Stockton-on-Tees in October 1974. The following year he was selected for Labour-held Peterborough, which he won in 1979. In the Commons, he was one of the few MPs with a scientific background. Following boundary reorganisation in 1997, he sat for North West Cambridgeshire.

Mawhinney joined the “Guy Fawkes” group of new 1979 Tory MPs. Largely non-Oxbridge, it was not as glamorous as the 1979 “Blue Chip” bunch. It was, Major said, a “workmanlike” group. If Chris Patten and William Waldegrave were Blue Chips with high expectations and already prominent, Mawhinney had, significantly, Major as a Guy Fawkes colleague. Major had been elected for the neighbouring Huntingdonshire seat and later, as prime minister, gave cabinet posts to Mawhinney, John Gummer, Richard Ryder and Gillian Shephard, all members of what was known as the “East Anglia mafia”.

As a backbencher, Mawhinney was interested in Northern Ireland and health, and was a member of Conservative committees on both. Although deeply religious, he was non-sectarian and kept his distance from the Rev Ian Paisley. He supported integrated schooling and, as a Northern Ireland junior minister, introduced it in the province. He was a member of the Conservative Christian Fellowship Group and the General Synod (for five years) and a lay preacher. An early autobiography, In the Firing Line (1999), was a serious exploration of his Christianity.

He campaigned against smoking and took a dim view of easing licensing hours. In keeping with his belief in personal self-reliance, he argued that people whose lifestyles led to ill-health should pay for their medical treatment. His family background gave him conservative views on most social issues, including abortion and Sunday trading. After a few weeks as a new member, he introduced a private member’s Bill to limit the exposure of indecent posters outside cinemas and clubs.

He was appointed under-secretary in the Northern Ireland Office in 1986 by Margaret Thatcher, and in 1990 Major promoted him to minister of state in the same department. Unionists attacked him for co-sponsoring the Anglo-Irish Agreement, on the grounds that they had conceded too much. In 1992 he moved to the department of health to support Virginia Bottomley over the reorganisation (including closures) of London hospitals and market-oriented NHS reforms; he was Mr Nasty to her Mrs Nice.

After his time at the department of transport, he remained in the cabinet as a minister without portfolio while party chairman. He was knighted in the 1997 dissolution honours list and was shadow home affairs spokesman under William Hague; many senior ex-ministers had refused to join the shadow cabinet. The downside was that he was a link with the now discredited past and returned to the back benches after a year. He left the Commons in 2005, and was made a life peer.

In 2013 he published another volume of autobiography, Just a Simple Belfast Boy.

Mawhinney married Betty Oja, whom he met as a student in Michigan, in 1965. They had two sons, Andrew and Stephen, and a daughter, Alison. – Guardian