Michael Harding: Memorial cards have a way of appearing from nowhere

Michael Harding: I imagine them falling out of the air, like messages from the invisible world 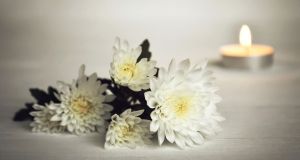 I’ve always been open to the possibility of a ghostly realm beyond my fingertips, especially in November

I was in Portlaoise last week having dinner with a young couple and we were talking about a mutual friend who died tragically last year. They even showed me a memorial card for the absent friend; his lovely young face smiling out at us, a head and shoulders shot, frozen in an image of heroic masculine beauty.

I stared at it, but there were no words that could match the moment.

After dinner I went off to sleep in a hotel close to the motorway but the traffic kept me awake and I couldn’t stop thinking about memorial cards all night. I never had one printed to honour my own mother when she died seven years ago, which I now realise was a shameful omission.

An old memorial card relating to an uncle lies on my writing desk, though he is long dead; but the laminated card with the details of his life and a tiny photograph of his face appeared out of nowhere a few years ago, and I have minded it ever since. There’s no explaining how memorial cards vanish and reappear at regular intervals and in unexpected places.

They fall out of books or appear on the mantlepiece or turn up unexpectedly in a drawer of socks. Or they lie hidden for years at the bottom of some cornflakes box where Christmas lights are stored. There are times I imagine them falling out of the air, like messages from the invisible world. I imagine concerned angels passing through the curtain between heaven and earth to drop the cards around the house when I’m sleeping.

My mother didn’t prevaricate on matters of cosmology; she believed in ghosts and nobody dared doubt her

I’ve always been open to the possibility of a ghostly realm beyond my fingertips, especially in November. The deciding moment was when my mother declared that she found a comb in a ditch when she was a child. She said she looked out the window that night and saw an old woman on Bridge Street wailing near the bicycle shop, announcing the death of her own aunt in New York the following day. My mother didn’t prevaricate on matters of cosmology; she believed in ghosts and nobody dared doubt her. And there was no reason to be frightened of something mother said was true; so I figured that death was as beautiful as November and as natural as a falling leaf.

Sound of a banshee

Whenever I cycled near the lakes as a boy in November the leaves rustled around me like the sound of a banshee shuffling across the floor of heaven.

And all my life I have watched trees in winter, withering so gracefully that I can almost hear them making a kind of music, like old swans.

On the first day of November this year I lost another old friend. He died in his sleep. He slipped away from the world gradually, over a few hours, like a boat leaving the shore, or like a Japanese actor who throws a black cloak over his body before sliding off stage as if he were already invisible, even before his exit.

My old friend’s universe had been reduced into the beat of his own heart. The cosmos had condensed into his in-breath and out-breath on the pillow, and his family watched for each wave until there was no more.

That’s the way death comes. Not as an event in itself but as a process. A slow changing of the weather.

And yet the moment when the breathing ceases and the heart has offered up it’s final beat, unfolds a miracle of silence. There’s an extraordinary transformation of energy in a room where someone has just passed away and it cannot be explained by rational analysis. It demands either magical thinking or poetry to adequately describe the beauty of that cessation, and the emptiness of that room.

When I woke in the hotel room in Portlaoise near the motorway, the morning after meeting the young couple, it was still dark but the hiss of the central heating coming on in my room, and the coughing of car engines in the car park outside the window signalled another day had already begun. Downstairs a dozen or so engineers en route to a motorway work site were having breakfast in the restaurant as their white vans sat in a neat line out in the car park. I went walking through the dark, along the road towards town, beneath the street lamps as cars screeched along the motorway; the roar of traffic sounding like animals in pain; as if the entire world out there was dying.