An Asian woman in Ireland: Some people assume I’m a ‘Thai bride’

New to the Parish: Bhisasha Chayangpath came to Dublin from Bangkok, Thailand, in 2018 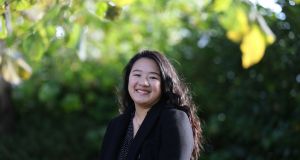 After growing up on the 15th floor of an apartment block in downtown Bangkok, Bhisasha Chayangpath, who goes by the nickname Paddy, wanted “a breath of fresh air” and applied to study in Dublin.

“I feel like I woke up one day and just thought, I’m going to love Ireland. I think partly it’s because I grew up in a city of nine million people; it’s so dense and so hot and so polluted that I just wanted to be somewhere really green.”

She opted for Trinity College Dublin, where she now studies English literature and sociology: “I felt like coming where Wilde and Beckett and Bram Stoker were from would be really cool.”

She was 18 when she arrived in Ireland in 2018, and says she experienced homesickness for about a week. She still reflects, from time to time, on the fact she is two flights and six time zones from home. But, she says, “I thank my lucky stars daily that I came to Ireland”.

Chayangpath has been known as Paddy since a young age, when her mother chose it as a nickname because she liked how it sounded, but the word does not carry any meaning in Thai; she has kept it since arriving, but says it has caused some confusion for those who expect her to be a man.

She has settled well into her life in Dublin, but over the past year she has been asked on a number of occasions whether she is “someone’s Thai bride”, and that others have made sexualised remarks about her as an Asian woman.

“I was in a cab and someone said, ‘Aren’t all Thai women in Ireland just Thai brides?’” she says. “And then he said, ‘I know you’re an educated woman, but if you’re ever in a cab with your boyfriend, just make sure you’re leading the conversation or most people are just going to assume that you’re a bride’.

“People have called me ‘forbidden fruit’, ‘foreign import’, and that’s in the context of being on a date. Someone put me on their phone as ‘Paddy from the Orient’; they thought it was funny but I didn’t think it was.”

She recalls how, on a date with an Irish man, he told her “I’ve always wanted to f**k a Thai girl”, and how another man who showed interest in her was teased by his friends for having “yellow fever”.

“Asian women are fetishised so much. The fetishisation of one Asian woman affects us all.

“I think some people think telling me ‘I’ve always wanted to f**k a Thai girl’ is a compliment. But I’m almost only a sexual conquest then, not my own person … You feel small and objectified. That’s not nice.”

Chayangpath says she believes many people in Ireland, and much of the West, associate Thailand with sex tourism, with little regard for the women involved in the industry. Prostitution is illegal in Thailand, and statistics on it vary. A 2019 UN study concluded there were around 300,000 sex workers in the country; another study in 2003 by Thailand’s Chulalongkorn University put the number as high as 2.8 million.

Chayangpath says she regularly thinks about the women in sex work in Thailand, the amount of money tourists spend on them, and how the country’s Buddhist tradition means it is often not discussed openly.

“I think it’s something that people don’t want to talk about – why are Asian women fetishised? It’s postcolonialism mentality … Asia has a different sexual culture. There’s quite a conservatism.

“I’m so privileged to be here. The only difference between me and any other Thai woman at home is just that I was lucky and have a father who can support me in the way he does.”

“It’s something I think about a lot,” she says. “I’m here, I get to be 6,000 miles away from living around the corner from a red-light district, but it upsets me a lot when people fetishise me. I relate it back to these issues of Thailand being seen as it is, and Asian women being seen as they are.

“I don’t know what I can do about that, though. I don’t want it to be something that plagues me every day, but it’s hard. I feel like it’s almost my responsibility to correct what people perceive [about Thailand and sex work].”

Since 2014 Thai authorities have increased raids on brothels and, according to media reports in Thailand, the government has pledged to step up action against prostitution. Legislation against hiring prostitutes under the age of 18 was strengthened, and anyone caught having sex with a child under the age of 15 is liable to be charged with rape. The country’s first female tourism minister has also said she wants Thailand to be seen as a place of “quality tourism” and not just a hub for the sex industry.

However, this sense of change is not widely felt, and Chayangpath says there is a cultural reticence to acknowledging the problems associated with sex tourism and the industry’s prevalence. “If Thai people aren’t going to talk about it, why would we expect foreigners to talk about it? We’ve been sweeping it under the rug for ages, we all know it’s a problem.”

She feels Irish society is more liberal, and she has felt it is more acceptable for her to discuss issues that might be seen as taboo in Thailand: “It’s very liberal, and Ireland has progressed a lot. Feminism here has been a different experience. I’ve felt like I can express myself more and not feel like I have to be a certain way, and that’s something which is quite restricting about Thai society.”

Despite some of the remarks made to her, Paddy says she feels at home and happy living in Ireland.