Grief doesn’t leave you. It lays bare your capacity to tolerate what is terrifying

Four years, and still I don’t know what to do on my mother’s anniversary 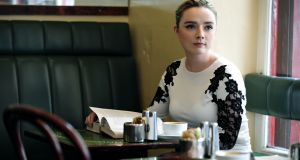 Laura Kennedy: “What is there to do, but get on with it?” Photograph: Aidan Crawley

Each year, the anniversary comes, and I’m not sure what to do with it. There’s a thick, syrupy texture to the week leading up, and the world becomes slower. I feel older, and get mysterious aches that I don’t talk about, because they feel like a mutinous body acting hysterical, and I’m embarrassed. My stomach aches and I lose interest in foods I usually like. My body desires dull, plain things in small quantities, as though it has enough to digest already.

This is year four. Four years since I’ve seen or spoken to her, and though I know I never will again, the time registers as a betrayal deep in my guts. The first year after she died (typical of that initial, sinuous grief) every experience I lived through was in the context of her absence, tainted by it, and rendered livid by it. Normal life was like walking with a new wound – every move pulled on the stitches, so that at the very least, she was still, in a sense, there. I was marked by her death, and I could feel it.

Now, we are at year four, and I am different, while she is captured in the unreliable stasis of memory. If she were here, she would be different too. I think about her still, every day. Of course I do. But I have learned to be resilient, and I am able to be without her; that too feels like a betrayal. It isn’t as though there is much choice in the matter, but even now, sometimes having a good day can feel like an insult to her memory.

I don’t like this time. Even before she died, it always felt like the perilous edge of the year. That span of short, brittle days from November to early February, when the year segues from a murderously apathetic end into the frozen, dark birth of an ambivalent beginning. It seems to be the window of time in which people die, or something vital is particularly prone to shattering inside them, and they disengage from their lives. There is too much time to think; too little warmth to make venturing out seem any more than an act of masochism. We stay at home with our problems, and churn.

Four years, and still I don’t know what to do on her anniversary


Grief does not leave you. It lays bare your capacity to tolerate the things that most terrify you, and to live in less than ideal circumstances. This is empowering, but it is also rather grim. You carry it with you into new experiences, into your attitude toward relationships and your life. You get, as they say, on with it. I was so reliant on my mother. She was my only parent, and my closest friend. I was twenty-seven when she died, and had yet to do so many things that I needed her guidance on. I hadn’t yet reached the point when I could give anything back to her, or take care of her. She was 58.

People around you don’t quite forget, but neither do they fully remember. They can find it odd when you don’t know what to do on the anniversary, or when Christmas makes you anxious and maudlin. They look at you baffled and with horrifying pity when they ask if you’re spending Christmas at home with your family, and you tell them you don’t really have either one.

Sometimes, they are wildly insensitive. Someone recently told me: “I don’t think I could ever fully function if my mother died. She’s my best friend. I really need her.” She looked at me then, as though it was my responsibility to solve this puzzle for her. As though my ability to conduct my life without my mother’s help and support was, in fact, evidence that I must not have really loved her.There is nothing to say in these situations that would make either person feel any better, so I stay silent.